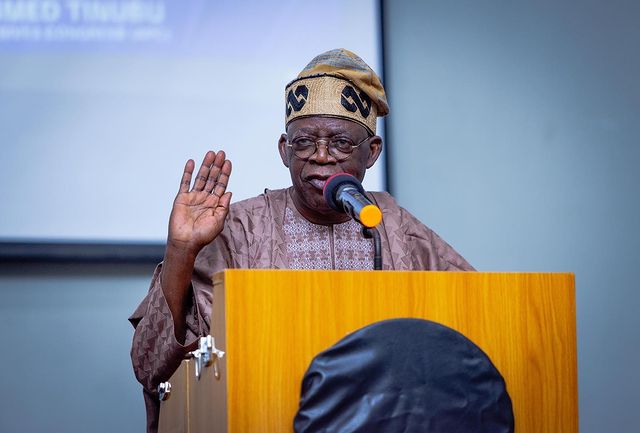 The All Progressives Congress (APC) presidential candidate, Asiwaju Bola Ahmed Tinubu, has revealed how he clinched the ruling party’s presidential ticket for the 2023 election despite ganging up against him.

The former Lagos State governor disclosed that he fought a hard battle to clinch the ticket at the party’s special convention at the Eagles Square in Abuja.

Tinubu stated this on Sunday when he returned to Lagos State for the first time after clinching the APC presidential ticket during the primary held early this month in Abuja.

Speaking at the palace of Oba of Lagos, Alayeluwa Rilwan Akiolu, the APC National Leader, said despite the seeming gang up against his person, he stood his ground, poured out his mind and fought to win the presidential ticket.

“There is no Lagos indigene that has had the opportunity to become President of Nigeria, despite the contribution of the State to the national stability and progress. The highest position attained by any Lagosian in national leadership is the position of Chief Judge of the Federation.

“I took up the fight to break this jinx. The battle to secure the APC ticket was hard. When I was almost fed up, I resorted to prayers. I also poured out my mind when I felt there was a gang up against my person.Thank God that I have brought home the presidential ticket.”

“The task ahead is to galvanise our people to get their voter cards and vote to enable us realise this ambition. Getting our people to vote is the most important task before all of us. We need to take this message to our people across communities and sensitise them on the need to vote in the general elections,” Tinubu was quoted as saying in a statement by Sanwo-Olu’s spokesman, Gboyega Akosile.