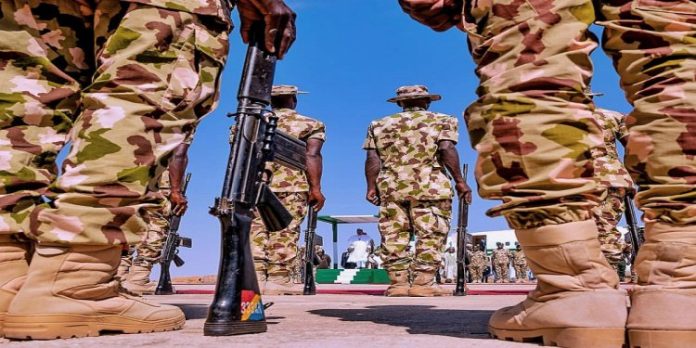 Nigeria spent N4.89 billion on weaponry and ammunition in the first quarter of 2022, down 86.8% from the N37.09 billion spent in the same time the previous year.

According to data from the National Bureau of Statistics on the makeup of Nigeria’s foreign commerce, this is the case. In comparison to the N9.32 billion spent in the previous quarter, the N4.89 billion spent in Q1 2022 marks a 47.5 percent decline.

Last year, Nigeria’s arms imports had risen to a record high of N72.49 billion on the back of rising insecurity and increased military activities against insurgents. However, despite the rise in various crimes and massacres, and with the election fast approaching in 2023, Nigeria has reduced its inflow of fighting arms and ammunitions.

Nigeria over the years has been embattled with various insurgencies including Boko Haram terrorism, banditry, armed robbery, land border smuggling, and outright killings, amongst others.

Nigeria continues to grapple with internal killings from various extremist groups. One of the highly pronounced groups, which has been responsible for hundreds of thousands of murders over the years in the country is Boko Haram.

According to the United Nations Development Programme report titled; “Assessing the impact of conflict on development in North-East Nigeria” the country has lost an estimated 350,000 people to the conflict in the Northeastern region, with 314,000 of the deaths from indirect causes.

This is before the recent massacre in Owo, Ondo State, where unknown gunmen stormed into a church, killing scores of people. This is also not the first time that suspected Boko Haram terrorists have killed people in their houses of worship.

On Christmas eve of 2020, several people were reported dead in Pemi, Borno State as suspected Boko Haram militants raided a Christian village community, shooting indiscriminately and burning down a church in the village.

Similarly, in 2014, it was reported that gunmen disguised as soldiers, fired at a crowd in a church compound in Borno.

How this affects the economy

Meanwhile, most of these attacks have been in the northern region of the country. However, with attacks like the recent one happening in the southwestern part of the country, it begs the need for the country’s military to ramp up efforts towards clamping down on these insurgencies. And if there is a need to increase the importation of arms and ammunition, it is only expected we do this.