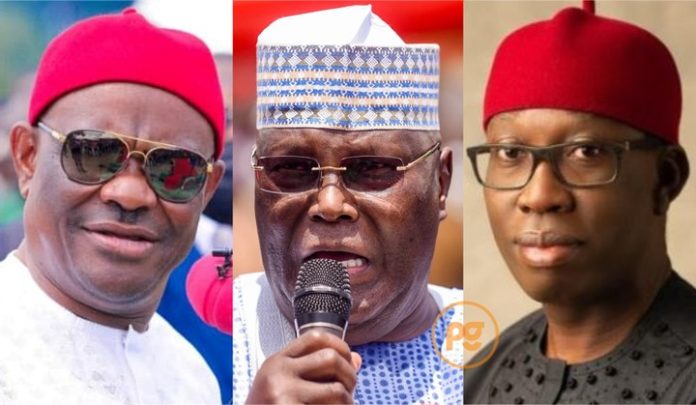 A panel of opposition politicians has recommended Nyesom Wike as the first option for Atiku Abubakar’s running mate.

The committee on Monday said the Rivers governor as vice-presidential candidate will do better for the ticket than his main challengers, according two sources familiar with the decision.

Governor Ifeanyi Okowa of Delta was recommended as the second-best politician to pair with Mr Abubakar; while Governor Udom Emmanuel of Akwa Ibom was placed third.

Governors, board of trustee members and the national working committee officials made contributions to the list.

“They were recommended based on their individual strength,” a source said.

The running mate option has been a close contest between Messrs Wike and Okowa, who was initially seen as a shoo-in for Mr Abubakar until recently when Mr Wike began showing keen interest.

Mr Abubakar has reportedly promised Mr Okowa the ticket since last year, and when Mr Wike sought the presidential ticket against Mr Abubakar, the choice was deemed easy.

But the rivalry became apparent last week when Mr Okowa issued a statement saying only God could stop him from emerging Mr Abubakar’s running mate.

It was not immediately clear whether or not the committee’s decision would prevail.

Mr Abubakar has yet to disclose his final decision, and a spokesman did not immediately return a request seeking comments.

There are other panels and think-tanks making recommendations to Mr Abubakar on his running mate choice.

The development came more than two weeks after Mr Abubakar was confirmed as the presidential candidate of the main opposition body, clearing the path for a showdown with Bola Tinubu, presidential flagbearer of the ruling All Progressives Congress.