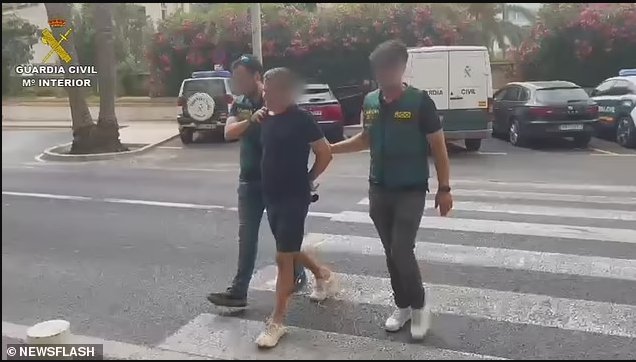 Following a police raid on a hotel in Benidorm, the “most sought” cocaine leader in Britain was taken into custody.

Louis James Edwards, the suspect, was apprehended on June 21, according to authorities in Spain.

The 44-year-old was captured on camera being led through a public area by two officers while wearing only a T-shirt and shorts. He is one of Crimestoppers’ most wanted criminals. Later, they allegedly gave him trainers.

He is believed to have led a criminal network that distributed cocaine all over southern England. Detectives tracked him to Malaga before their search led them to the southeastern province.

In a separate raid the next day, also in Alicante, police arrested Dutch national Cornelis Korfet.

The 35-year-old was seized in L’Alfas del Pi, not far from Benidorm.

An official video of shaven-headed Korfet’s arrest shows him trying to flee through a cafe after enjoying breakfast with friends.

Korfet is wanted for attempted murder by Dutch police, who say he carried out a revenge shooting in a gang war, seriously injuring two victims.

Police said in a statement: “The rapid collaboration between the Dutch police and the Civil Guard made it possible to locate this person in the province of Alicante, where it was confirmed that this same person had already been arrested on three occasions with different identities, none of them real. “Once an intense surveillance on the criminal environment of the fugitive had been established, it was found that he was already using a fourth false identity

“He was located and arrested in the Alicante municipality of L’Alfas del Pi on June, having recently arrived from Barcelona.”