social media with their summer body, DJ Cuppy is not having that in mind as she

DJ Cuppy who released her much anticipated album ‘Original Copy’ some

Despite not having a boyfriend, DJ Cuppy noted that she had added weight but her

priority remains her health and not losing weight.

She stated that just like year when she choosed summer money over body, the

summer body but will be eager to make summer money.

her own personal album.

The award winning disk jockey and singer will be hoping her album can win her some awards when the year finally runs out. 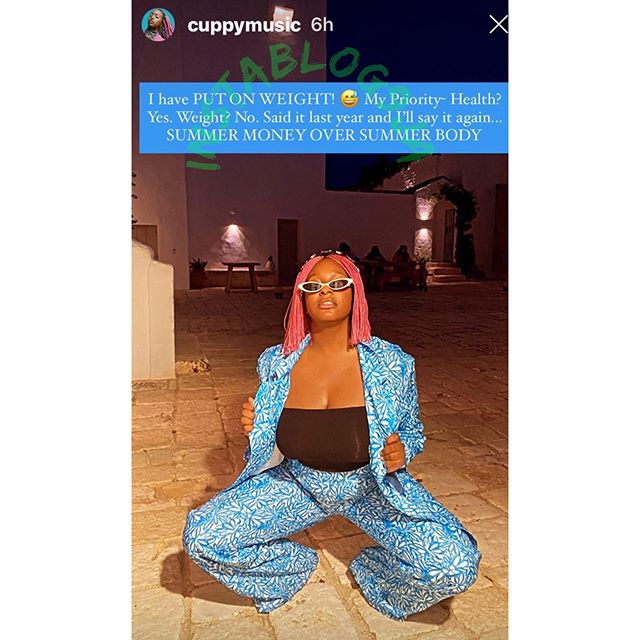 Bobrisky offers N1M cash gift to his diehard fan who tattooed his image on...

Adedokun Moses - January 28, 2021 1
Popular Instagram male barbie Bobrisky has blessed one of his diehard fans with a sum of one million naira after she tattooed his image...

Adedokun Moses - August 22, 2020 0
Big Brother Naija 'Lockdown' housemate, Nengi have once again reveal some of her deepest secrets that people might not know about her. Nengi have become...

Omoni Oboli On The Queue, Laments INEC Officials Are Yet To Arrive Venue

Johnson Olumide - March 21, 2020 0
Nollywood actress Omoni Oboli who has been on the queue cries out after INEC officials are yet to arrive venue. She wrote; It’s almost 8:30am...

Adedokun Moses - January 4, 2020 0
It's currently a sad moment for Nollywood actress, Adaorah Ukoh who has annouced the passing away of her mother. The curvy and endowed actress took...