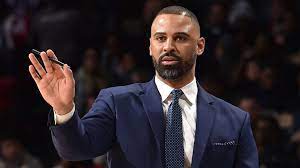 Former Nigerian-American professional basketball player, Ime Udoka, 43, has been hired by the Boston Celtics as their new coach.

According to the Associated Press on Wednesday, the hiring was first reported by ESPN even as the deal had not been officially announced by the club.

Ime Sunday Udoka is a Nigerian-American former professional basketball player and current assistant coach for the Brooklyn Nets of the National Basketball Association.

He represented the Nigeria national basketball team during his playing career.

READ ALSO
Neymar shut down the internet with half naked photoshoot

#BBNaija: “Don’t Kill Yourselves, Housemates Will Win Their Money, Walk Away” – Toyin Abraham...

Violette - April 21, 2018 0
Stunning Nollywood actress, Toyin Abraham has told fans of the Big Brother Naija reality show to take it easy with the way they fight...

Violette - January 16, 2020 0
Singer and songwriter Davido has not been shy in showing how dramatic he can be and he's not slowing down any time soon as...

Johnson Olumide - March 21, 2020 0
Ghanaians have descended on the Rufftown Record signee, Wendy Shay for editing her backside. According to Ghanaians, editing has always been the reason behind Wendy...

Violette - November 10, 2019 0
Headies was held yesterday but the pictures are still coming in as celebrity comedian Ayo makun took to his Instagram page to share a...

BBNaija’s Nina Ivy finally shows off her backside 11 days after her butt surgery...