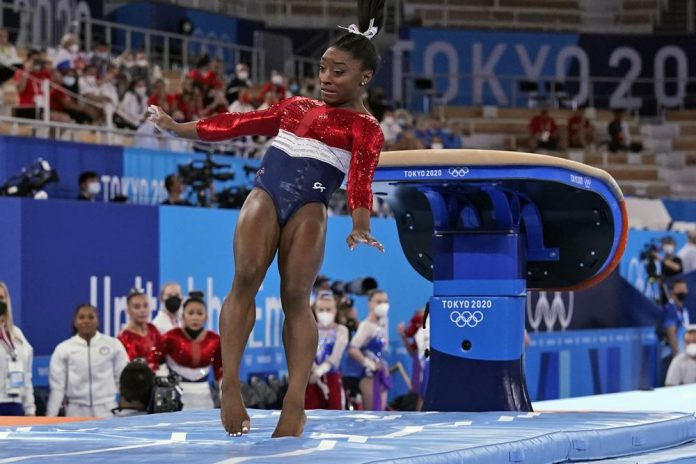 TOKYO (AP) — Simone Biles came to Tokyo as the star of the U.S. Olympic movement and perhaps the Games themselves. She convinced herself she was prepared for the pressure. That she was ready for the spotlight.

Only, as the women’s gymnastics team final approached on Tuesday night, something felt off for the American star. So rather than push through the doubts that crept into her head as she’s done so many times before, she decided enough was enough.

Biles withdrew from the competition following one rotation, a stunning decision that opened the door for the team Russian Olympic Committee to surge to gold.

Her American teammates held on for silver after the 24-year-old realized following a shaky vault she wasn’t in the right headspace to compete.

“I didn’t want to go into any of the other events second-guessing myself,” Biles said. “So, I thought it would be better if I took a step back and let these girls go out there and do their job.”

Biles spent the final three rotations serving as head cheerleader while Grace McCallum, Sunisa Lee and Jordan Chiles carried on without her.

The U.S. drew within eight-tenths of a point through three rotations. ROC, however, never wavered on floor.

And they erupted when 21-year-old Angelina Melnikova’s score assured them of the top spot on the podium.

The victory came a day after ROC men’s team edged Japan for the top spot in the men’s final.

Rqpe Case: Wake up Nigeria, your women are not safe – Singer Waje cries...

Violette - May 3, 2021 0
Popular singer and singer Waje has taken to social media to cry out over the trending rqpe cases across the country, noting that Nigerian...

Violette - January 15, 2021 0
YouTube has listed Fireboy, a Nigerian singer, and Sauti Sol, a Kenyan band, among the content creators to receive grants for the development of...

Violette - December 29, 2020 0
EndSars frontliner Modupe Odele has announced that she is currently at home being quarantined for the deadly Coronavirus after being exposed to  the contagious...

Johnson Olumide - March 21, 2020 0
A Nigerian lady who ordered for taxi online was surprised when she saw the picture and name of the driver, former big brother Naija...