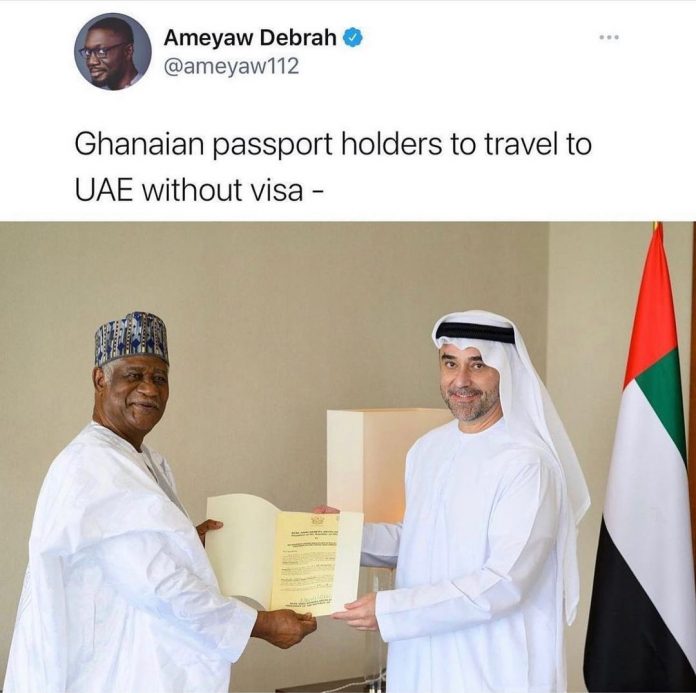 Ghanaians seeking to travel to Dubai in the United Arab Emirates (UAE) can now do so with ease following the approval of a visa-free deal between the two countries.

An agreement to offer visa-free entry to Ghanaians and UAE passport holders has been approved by Parliament.

The visa waiver agreement, which was contained in a Memorandum of Understanding (MoU) between the Government of Ghana and the UAE on mutual exemption of entry visa requirements, is in respect of diplomatic, service/special and ordinary passport holders.

The agreement was executed on November 18, 2019 with the object of waiving the visa requirements for these passport holders in Ghana and the UAE, who can stay for a period not exceeding 90 days.

Minister for Foreign Affairs and Regional Integration, Shirley Ayorkor Botchway, presented the MoU to the House on May 26, 2021, which was referred to the Committee on Foreign Affairs for consideration and report in accordance with Order 140(4) and 183 of the Standing Orders of Parliament.

Chairman of the Committee, Bryan Acheampong indicated that during a presentation of their report that Ghana/UAE had had fruitful cooperation, indicating that the two countries were desirous to take the bilateral relations to another level.

According to him, the agreement constitutes a comprehensive framework on visa regimes for both countries and does not impose obligations on the two parties to admit people who are considered to be of questionable character into their territories.

He reported that neither did the MoU impose any financial obligation on the two countries nor provided direct financial gains from its implementation.

The Abetifi MP said the agreement had been fashioned in a way to create a win-win situation for both countries, and added that relaxed visa entry requirement is expected to yield tremendous benefits to citizens of Ghana and UAE through improved relations, trade and bilateral co-operation.

Mr. Acheampong stated that visa waiver arrangements to facilitate the movement of diplomats and government officials are common, except that this one makes ordinary passport holders beneficiaries.

Violette - May 4, 2020 0
Female singer and songwriter, Seyi Shay has advised her female counterparts on what to look for before dating a guy. With women known for having...

I had my first Orgasm watching Nicolas Cage in Face/Off movie as a Teenager...

Johnson Olumide - July 9, 2021 0
Hollywood actress and comedienne, Tiffany Haddish in a recent interview with NPR revealed that she had her first-ever orgasm and she gives actor Nicolas...

Johnson Olumide - February 18, 2020 0
The Controversial Nollywood actress would be truing a year older in a couple  of day from now and she has already set the ball rolling with some...

Johnson Olumide - May 29, 2020 0
The 2018 edition of the biggest British musical awards held last night at the London O2 arena and it was awesome as the red...

Johnson Olumide - March 9, 2021 0
BBNaija reality star Nengi from the Lockdown Edition becomes the second Housemate from last year edition to own her own house. Nengi took to her...