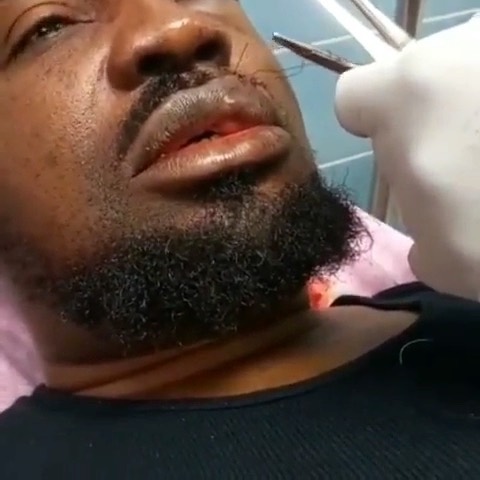 Okechukwu Edwards Ukeje, Nigerian rapper better known as Mr Raw, has been hospitalized after his involvement in a ghastly car accident.

The musician broke the news via his Instagram page where he shared pictures of his badly damaged car.

He also shared photos of scars left on his body at the hospital where is currently receiving treatment from the road mishap.

Mr Raw said the accident took place along Bannex junction axis of Abuja on Saturday after a vehicle rammed into his car.

The rapper, previously known as Nigga Raw, added that he passed out twice after the incident before he was rushed to the hospital.

He disclosed that his driver as well as Mike Israel, his friend, were in the car when the incident occurred, adding that they’re also recuperating.

“Thank God for my life o! It’s a blessing being alive in the land of the living. I was involved in a ghastly motor accident early this morning at Abuja (before Bannex junction)….” he wrote.

“I was unconscious when I was pulled out of the red car after another driver rammed into our car.

“I passed out twice but I am stable now and responding to treatment.

In other news, BBNaija Female Housemate, Jackie B revealed that she can’t date new housemate, Michael because he got a small d*ck (watch the video here).

Leicester City Stunned as they lose 2-1 to Hull City on Open Day of...

Johnson Olumide - February 18, 2020 0
The Sexy and Curvaceous Tennis Player has been having the best moment of life since returning back to the U.S after her 2016 French...

Davido thanks Adekunle Gold for writing one of his favourite songs on his forthcoming...

Violette - May 11, 2020 0
The soon-to-be husband, Davido, has expressed appreciation to Adekunle Gold for helping him out with one of his favourite songs on his upcoming album....

Johnson Olumide - May 12, 2020 0
I really don't know how this relationship is going to end or the way forward,neither am i forecasting  anything bad to the relationship. but the truth is every time i...