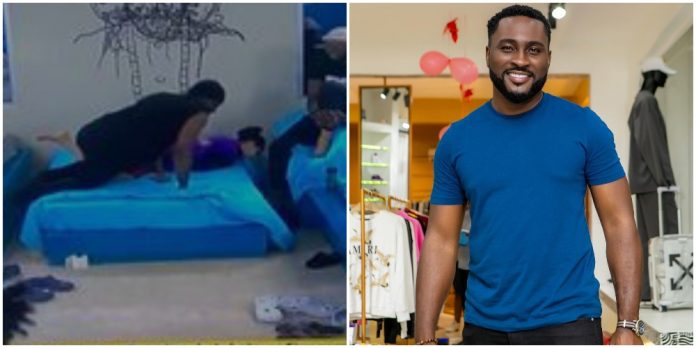 The Big Brother Naija season six housemates have begin their truth and dare game with Pere asked to show his favorite sex styles.

Tagged ‘Shine Your Eye’, the season six edition of the reality show is gradually living up to it’s hype and expectations as housemates are beginning to come out of their shell.

They had their first party on Saturday night and Ebuka finally revealed the two wild cards to housemates during the live eviction show.

The housemates failed to get the two wild cards among them as Liquorose and Jaypaul were voted instead of Maria and Pere.

With Maria and Pere now an authentic housemates, they joined the truth or dare game and it’s a fun filled moment for the housemates.

When asked to show the world how he loves to run the show during sexual intercourse, Pere choosed Maria as his partner.

He then unleashed his style on her, a move that got other housemates talking.

In other news, popular Instagram big boy and businessman, Mompha has revealed why Hushpuppi was apprehended by the FBI.

Mompha during an interview with Daddy Freeze stated that Hushpuppi was stubborn and does not listen to instructions, a move that landed him in trouble. (See Video of the Interview Here).

Violette - September 27, 2021 0
Multiple award-winning Nigerian singers and songwriters, Tiwa Savage and Seyi Shay are yet to settle their grudges that have been on for the past...

Violette - November 10, 2019 0
Nigeria Disk jockey, Dj Cuppy is launching her own cocktail as she took to her Instagram timeline to post a video showing a sneak...