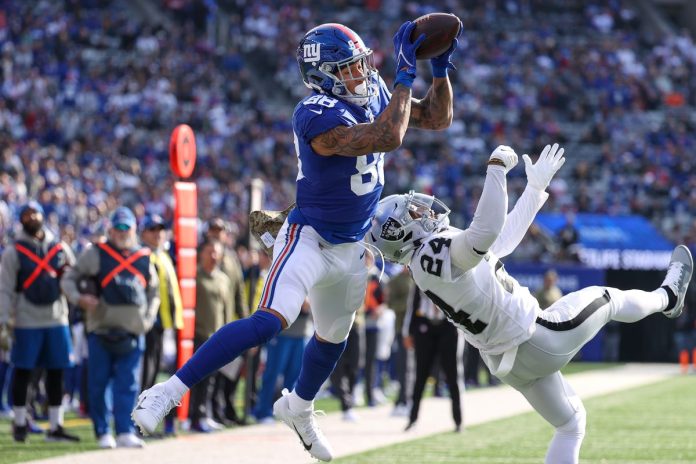 For the second straight season, the New York Giants’ have leaned on the strength of a stingy secondary and stout front seven to keep them in football games.

Needless to say, the work of defensive coordinator Patrick Graham — who was hired by head coach Joe Judge in 2020 — hasn’t gone unrecognized across the league.

According to CBS Sports NFL Insider Jason La Canfora, the 42-year-old “is continuing to mount buzz in league circles for his fine work with a unit that is thin on individual talent.”

La Canfora noted that the Mara family is “very high on Graham”, and that “some in league circles believe” he’d be a major candidate to replace Judge as the club’s head coach if the Giants opted to cut ties with Judge.

Graham inherited a unit that ranked 25th in total defense and 30th in scoring in 2019. Last season, the Giants finished with the 12th best defense and ninth in scoring, allowing just 22.3 points per game.

Although the Giants’ defense struggled out of the gate in 2021, they have since regained that 2020-like form. New York upset the surging Las Vegas Raiders 23-16 at home last Sunday, and they only gave up 20 points to Patrick Mahomes’ Kansas City Chiefs in a close Week 8 Monday night loss.

Recent trends certainly bode well for Graham. It’s not uncommon for teams to hire defensive coordinators for the HC role following success with their previous team(s).

The Miami Dolphins hired Brian Flores for the head coaching role after spending the 2018 season as the New England Patriots’ linebackers coach and defensive play-caller. The Denver Broncos gave Vic Fangio his first NFL head coaching position after his No. 1 scoring defense propelled the Chicago Bears to a surprise NFC North division title in 2018.

If the Giants defense sustains its recent and dominant play for the final half of 2021, Graham will only increase his chances of earning a head coaching role.

Coming off their bye, the 3-6 Giants will look to score another win against a familiar foe when they visit Tom Brady and the Tampa Bay Buccaneers on Monday Night Football in Week 12 (8:15 p.m. EST).

Judge May Use Two RBS When Barkley Returns

Giants star running back Saquon Barkley has missed the last four games as he continues to recover from a sprained ankle that he suffered in Week 5 against the Dallas Cowboys.

Barkley’s status for Week 11 is up in the air. But when he returns, it doesn’t necessarily mean that Devontae Booker will see a drastically reduced workload.

Booker has performed fairly well in Barkley’s absence, recording 251 rushing yards in the last four games. Judge has been impressed enough by Booker to the point where he may use a two-back system even once Barkley returns.

“(Booker has) done a lot of things that give us the confidence to go ahead and put him in there, and you’re always better off having two guys that can carry the ball and stay fresh out there and keep wearing down a defense,” Judge said, per Dan Salomone of the team’s official website.

“Those two-headed monster teams are tough to face,” Judge continued. “Obviously, that wouldn’t take us out of finding ways to get Saquon the ball, that’s always going to be a main point of it just as it would for all our other playmakers, but along the way you want to have a lot of depth at those positions to keep playing and have them fresh.”

Booker has 315 rushing yards and two rushing scores on 85 carries this season.

The Giants are one of the few teams that have consistently given Brady problems. Eli Manning’s 2007 and 2011 squads were responsible for two of Brady’s three Super Bowl losses, and they handed New England a rare home loss back in Week 9 of the 2011 season.

When these teams met in Week 8 of last season, the Giants (1-6 entering that game) narrowly upset the defending Super Bowl champions. But a failed New York two-point conversion attempt in the waning seconds allowed Tampa Bay to escape with a 25-23 victory.

Quarterback Daniel Jones has been much better at protecting the football this season, and as we saw last year, the New York secondary is capable of matching up with Tampa’s top receiving threats.

New York is coming off the bye, and they should be able to hang in there against an injury-ravaged Tampa team that has lost two in a row.

But it’s tough to envision the defending champs losing a third straight game, especially with this one being at home. Even if the Giants’ D keeps Brady and company in check, Tampa’s fierce pass rush and run-stopping game should keep Jones frustrated.

It should be close again, but the superior and more talented Buccaneers will barely avoid a third straight defeat.