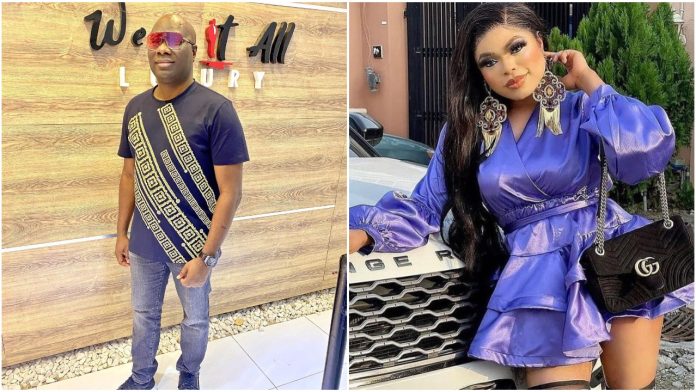 Mompha lawyers served Bobrisky with court paper as she is being sued for 1billion over libelous and defamatory publications.

Recounting earlier that the two haven’t been on good terms after Bobrisky accused the businessman of giving the actress, Tonto Dikeh 300,000 naira and also inciting that two had an affair.

The tussle between them hasn’t ended as the two have been waging war online and attacking themselves.

Mompha who declared that he had nothing to do with the crossdresser, Bobrisky, and his religion also forbade having anything with homosexuals.

However, Mompha has now taken the case to the court making his lawyers serve Bobrisky court papers as he is being sued for 1 billion naira.

see his posts below.

Meanwhile, Singer, Portable acquires a new car as he thanks Olamide and Poco lee for the fame (read it here)

Violette - November 22, 2019 0
Davido’s Fiancée and baby Mama Chioma Avril Adeleke has uploaded a video of herself and her son dancing and having fun on her Instagram...

Tega apologizes for her misconduct with Boma during the Big Brother Naija Reality show...

Ifeoma Ngozichukwu - October 11, 2021 0
The Big brother Naija reality star, Tega apologizes in an interview, as she says she didn't have sex with Boma but she's sorry for...

Violette - December 11, 2020 0
Veteran Nollywood actress and filmmaker Uche Jombo has reacted to the latest drama that happened during the court trial of former Chairman of the...

Seems One of the Ladies Who Accuse Davido of Impregnating Her Has Been Arrested...

Violette - November 10, 2019 0
Recall Drama that unfolded yesterday when a two ladies went viral for posting a video of themselves accusing Davido of Impregnating one of them. Seems...