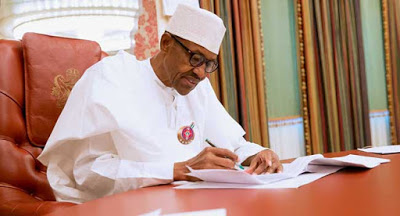 The president also signed the 2021 finance bill into law.

President at the signing ceremony was the President of the Senate, Ahmed Lawan, Femi Gbajabiamila, speaker of the house of representatives, Zainab Ahmed, minister of finance, budget, and national planning.

This is coming less than a week after the house of representatives and senate passed the appropriation bill.

The two chambers increased the budget spending by N735.8 billion from the proposed N16.391tn to N17.126 trillion. They also raised the oil benchmark from $57 per barrel proposed by the executive to $62.

The National Assembly also fixed oil production at 1.88 million barrels per day, the exchange rate at N410.15 to the dollar, GDP at 4.2 percent, and inflation at 13 percent.

Speaking at the event, Buhari said the 2022 Budget, just signed into law, provides for aggregate expenditures of N17.127 trillion, an increase of N735.85 billion over the initial Executive Proposal for a total expenditure of N16.391 trillion.

The president explained that N186.53 billion of the increase however came from additional critical expenditures that he had authorized the minister of finance, budget, and National Planning to forward to the National Assembly.

‘‘The Minister will provide the public with the details of the budget as passed by the National Assembly, and signed into law by me,’’ he said.

He announced that as the 2023 Budget is going to be a transition budget and that work will start in earnest to ensure early submission of the 2023-2025 medium-term expenditure framework and fiscal strategy paper as well as the 2023 appropriation bill to the national assembly.

He directed heads of ministries, departments and agencies (MDAs) to cooperate with the ministry of finance, budget and national planning, more specifically with the budget office of the federation, to realize this very important objective.

“You’re a rare gem” – BBNaija’s Queen back Tiwa Savage amid her s3x tape...

Johnson Olumide - March 21, 2020 0
Self acclaimed billionaire, Linda Ikeji had a rich woman’s dilema on which car to drive out earlier today. The 38-year old blogger, a mother of...