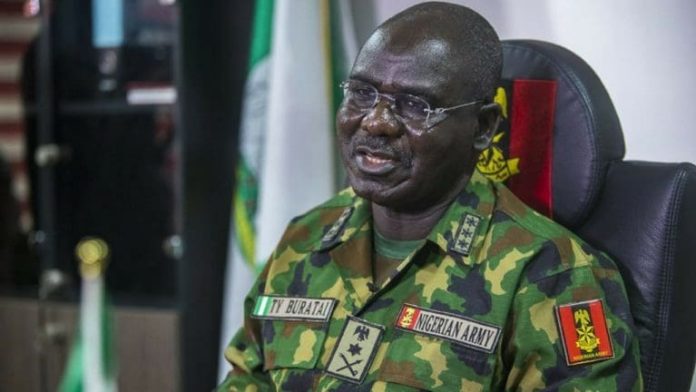 Nigeria’s ambassador to the Republic of Benin and former Chief of Army Staff, Lt. Gen Yusuf Tukur Buratai (retd), has dissociated himself from a campaign to drag him into the forthcoming race for the presidency.

The disclaimer follows the emergence of Buratai’s campaign posters in some parts of the Nigeria. Buhari made Buhari an ambassador after he retired from the army and the former military chief says he has no intention to become president.

A statement signed by Brig. Gen. Sani Kukasheka Usman (retd) explained that the former army boss remained loyal to President Muhammadu Buhari and was grateful for the opportunity to serve as ambassador.

According to the statement, “…it is essential to state that the ambassador has never indicated interest, discussed with, or directed anyone on such matter.”

“Therefore, such calls and posters should be discountenance as they did not emanate from him, nor is he interested in them.

‘It is entirely the handiwork of some people for reasons best known to them.

“He (Buratai) remains loyal and eternally grateful to President Muhammadu Buhari for the opportunity to serve.

“He wishes to thank all well-meaning persons, friends and well-wishers who showed concern over this development.”