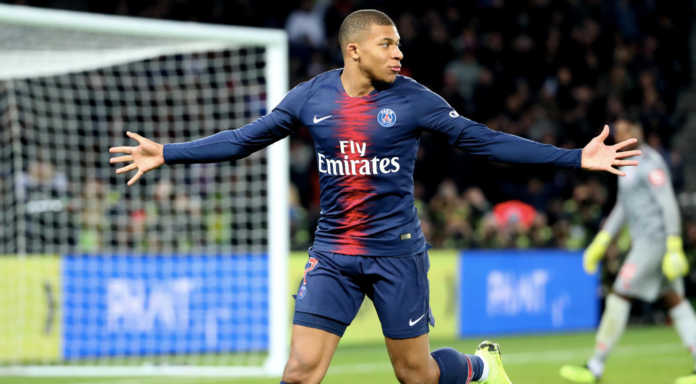 Kylian Mbappe notched two goals and three assists as Paris Saint-Germain beat Lorient 5-1 and maintained its 12-point lead over Marseille to move ever closer to a record 10th French league title on Sunday.

Mbappe provided the spark in the final third from the fourth minute with a dribbling run and low shot that goalkeeper Matthieu Dreyer palmed away. Soon after, the France striker fed Neymar, who opened the scoring.

The lead doubled in the 28th when Mbappe scored with his signature move, faking a curler into the far corner before drilling into the near corner.

When Lorient forward Terem Moffi cut the lead in the 56th by pouncing on a sloppy back pass from Achraf Hakimi to knock the ball past goalkeeper Gianluigi Donnarumma, PSG supporters loudly booed their team’s lapse in concentration.

Mbappe dashed Lorient’s hopes of a comeback by raising his league tally to 17 goals, dribbling past Julien Laporte to bury the ball into the bottom corner in the 67th.

Six minutes later, Mbappe squared the ball back for Lionel Messi, who shot under the crossbar for 4-1. Mbappe made his league-leading 13th assist by playing Neymar in for the final goal in the 90th.

“We must bring back that 10th league title for the supporters, for the club. It’s important,” Mbappe said. “We have an opportunity to make history.”

PSG has relied heavily on Mbappe’s brilliance this season. However, his contract runs out this summer and Mbappe hasn’t committed to any club yet.

“I haven’t made any decision yet,” Mbappe said. “I’m still thinking because there are new factors (…) I don’t want to get it wrong. I want to make the right choice.”

Marseille consolidated second place by rallying past relegation-threatened Saint-Etienne 4-2 in a game full of blunders.

Gabon striker Denis Bouanga gave Saint-Etienne the lead in the ninth minute by shooting past goalkeeper Pau Lopez, who made an embarrassing handling mistake.

But Saint-Etienne self-destructed by conceding two penalties and scoring an own goal.

Marseille’s third straight league win opened a three-point gap on third-placed Rennes, while Saint-Etienne remained in the relegation zone, one point from safety.

The top two clubs qualify for the Champions League while the third-placed club goes to qualifying.

Strasbourg emerged as a surprise contender in the race for European spots after edging Lens 1-0 to climb up to fourth place.

Strasbourg stretched its unbeaten run to eight games to go level on points with Nice and just two points behind Rennes. The team’s best finish in the past 20 seasons was 10th in 2020.

Nantes handed Clermont a fourth straight loss, 3-2, Brest won at mid-table Montpellier 2-1, and Troyes beat Reims 1-0 in injury time to move away from the relegation zone.