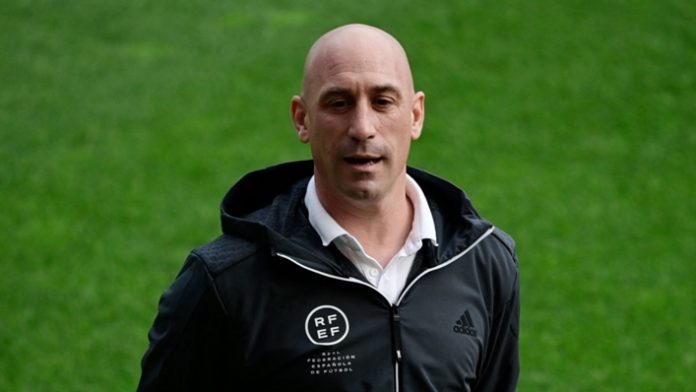 Luis Rubiales, president of the Royal Spanish Football Federation (RFEF), has rejected claims of wrongdoing after reports that Gerard Pique asked him to intervene in the selection of Spain’s squad for the Tokyo Olympics.

A series of conversations between Rubiales and Pique have been leaked by Spanish publication El Confidencial in recent days, focusing on Pique’s involvement in moving the Supercopa de Espana to Saudi Arabia.

New leaks, however, appear to show Pique asking Rubiales to ensure he was picked for the delayed 2020 Olympic Games, at which he wished to make his Spain return after retiring from international football in 2018.

Pique is allegedly heard telling Rubiales in one audio message: “You have to do this for me Rubi, you have to get it for me,” referencing a spot in the Olympic squad coached by Spain U21 boss Luis de la Fuente. The Barcelona centre-back is also have said to have hit out at Sergio Ramos’ more public request to be involved.

At a news conference held on Wednesday, however, Rubiales denied the messages exposed any wrongdoing from himself or Pique, saying it was “normal” for players, with many of whom he is close, to make such requests.

“Maybe another one [player] appears who asked me to, and it’s not Pique. I’m going to keep talking to them like that. I have a conversation with someone I’ve known for years and I speak as I speak,” Rubiales said.

“There were more [players] who asked me. He [Pique] announced a long time ago that he did not want to return, and I spoke with Luis de la Fuente so that he would know who had called me.

“It is common when one is a great player and he wants to come back [to the national team]. Then Luis made a very different decision. We act with the utmost honesty. He is not the only footballer who has asked me to do so.”

Pique, along with Ramos, was ultimately left out of the squad, with Spain earning the silver medal after a 2-1 extra-time defeat to Brazil in the final.

Meanwhile, attention has also been drawn to the new four-team format introduced for the Supercopa since it moved to Saudi Arabia, with Rubiales’ federation accused of being motivated by a financial need for giants Real Madrid and Barca to remain involved.

Rubiales admitted that the likelihood of those two clubs being involved did result in greater revenue being generated through TV rights sales, but denied that this amounted to any sort of favouritism.

“We sell the TV rights to the final all over the world. There are some countries that wait to bid when they are the finalists,” Rubiales added. “If there is a derby or Clasico, the offer multiplies a lot.

“That adds to the management and would affect the variable. [But] we have no idea who is going to play in the final.”