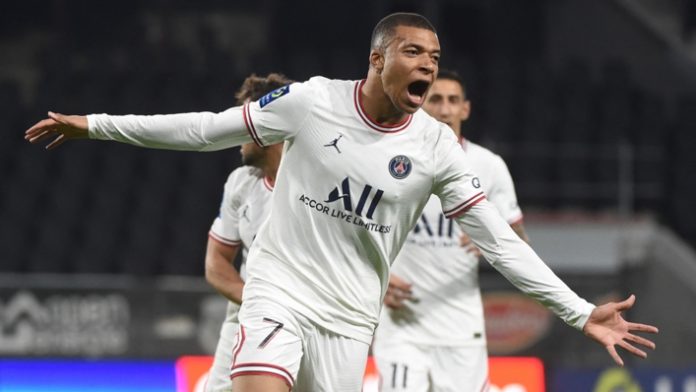 Despite a 3-0 win over Angers, Paris Saint-Germain were unable to kick off their Ligue 1 title celebrations after Marseille overcame Nantes.

With their title rivals losing and Kylian Mbappe and Sergio Ramos scoring, Mauricio Pochettino’s side appeared to be on their way to the 10th triumph at halftime.

However, after extending their lead in the second period thanks to Marquinhos, a comeback by Marseille deprived them of the title.

Instead, PSG will have to wait for their eighth title in ten seasons, even if triumph appears to be a foregone conclusion.

The visitors were dealt an early setback as Mauro Icardi pulled up during the warm-up, prompting Pochettino to introduce Eric Ebimbe.

Sofiane Boufal tested Keylor Navas from distance before sending a one-on-one chance wide of the post as Angers appeared to be poised to take advantage.

Unfortunately, the former Southampton man only lasted 14 minutes before succumbing to injury, and PSG’s threat was shown when Thilo Kehrer and Marquinhos both went close from Angel Di Maria corners.

That pressure eventually paid off, with Mbappe scoring before the half-hour mark thanks to a quick exchange of passes with Achraf Hakimi and a left-footed piledriver.

PSG now has 11 goals from beyond the box this season, while Angers has conceded 10, giving them the best and worst records in Ligue 1.

Soon after, the hosts came close to scoring a long-range goal of their own, with Mohamed-Ali Cho curling a shot beyond the post.

However, they were penalised before the interval for failing to take that chance, with Ramos heading home yet another magnificent Di Maria cross from the left.

PSG were unbeaten in their last 23 Ligue 1 games when leading at halftime (W22, D1), and gave no indicators that a second-half meltdown was on the cards.

Instead, they appeared to be on the verge of extending their lead, with Hakimi denied after sliding in behind early on, and Mbappe forcing another wonderful save with a powerful left-footer from inside the box shortly after.

Angers’ hopes of a comeback were dashed when a penalty was overruled after a VAR review revealed Kehrer had made a clean challenge on Cho in the box.

So when Marquinhos headed home a Di Maria cross, even the late loss of Edouard Michu to a rather untimely red card did not detract from PSG’s simple victory.