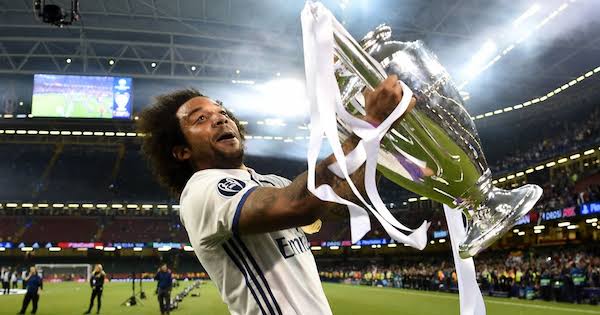 Real Madrid fullback, Marcelo, has confirmed he will be leaving the club after winning a record-breaking 25th trophy with the Spanish giants, Newspremises has gathered.

Last night’s Champions League triumph gave Marcelo the opportunity of end his Real Madrid career, as he has made it known that the Champions League final was his last match for the Spanish giants.

The LaLiga champions beat Liverpool 1-0 in the Champions League final on Saturday.

Marcelo was an unused substitute in Madrid’s win in Paris, but lifted the trophy as club captain.

The 34-year-old had said earlier this week, that he wanted to stay at the Bernabeu with his contract due to expire next month.

But after the game, he told reporters in the mixed zone:

“It’s an incredible emotion because it’s my last game at Real Madrid.

“Leaving with a Champions League is a huge joy. It isn’t a sad day.”

Marcelo joined the Spanish club from Fluminense in 2006.

He became Real Madrid’s captain for just one season after he took the mantle of leadership from Sergio Ramos, who left for Paris Saint Germain last summer.

It was enough to make history though, as he became the first foreigner to captain the club since 1904.

He also leaves the club as the most decorated player in the history of Real Madrid, having won 25 trophies with the club.

Marcelo has been linked with Fluminense, his childhood club and a free transfer could happen.

Nothing is official for now, so the decision is left for Marcelo to make.