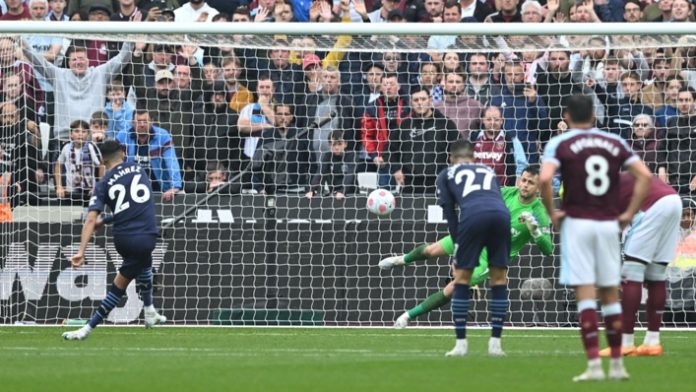 The Reds won the FA Cup on Saturday, and their chances of completing an unprecedented quadruple seemed bright after Jarrod Bowen’s double put West Ham up 2-0 at halftime.

Despite the more sloppy defense, Jack Grealish pulled one back for City, who drew level when Vladimir Coufal headed into his own goal.

When VAR detected Craig Dawson’s foul on Gabriel Jesus, it appeared that Mahrez would cement a remarkable comeback triumph, but Lukasz Fabianski made a great save to keep Liverpool in the championship race, despite the fact that they are four points behind with a game in hand.

Early on, City dominated possession, but West Ham was threatening on the break, and that strategy paid off when Bowen evaded the offside trap, rounded Ederson, and calmly slotted home in the 24th minute.

City struggled to answer at first, though Jesus’ dipping shot in the 36th minute almost reached the bottom-left corner.

Before the break, West Ham struck again, with Bowen creating space on the edge of the box and firing a precise finish past Ederson.

Grealish’s shot deflected in off Dawson to give City the lead just four minutes after the restart.

Grealish set up Bernardo Silva for a chance that Fabianski saved excellently, yet sloppy defense could have cost City had Bowen or Michail Antonio been more clinical.

With 21 minutes remaining, West Ham was punished as Coufal headed a free-kick past Fabianski.

Before City was given a wonderful opportunity to win it when Dawson took down Jesus, Aymeric Laporte diverted a goal-bound Bowen shot wide. Mahrez took a step forward, but Fabianski predicted correctly, to Pep Guardiola’s chagrin.