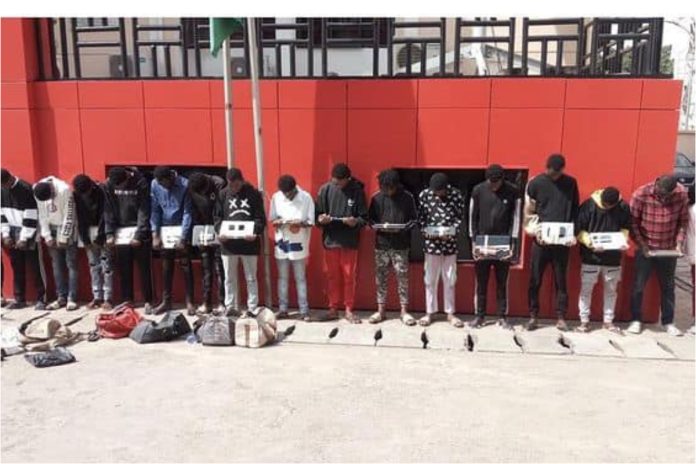 A Nigerian man who reportedly recruits young boys to train them on how to indulge in internet scamming in a school he established called Yahoo Yahoo Academy has been arrested.

The man, Afolabi Samad was nabbed by the Abuja Zonal Command of the EFCC together with 16 trainees during a swoop at his illegal school situated in Abuja.

The 24-year-old was arrested on Thursday, May 12, 2022, in a sting operation alongside 16 of his students. According to Instablog9ja, the youngsters between the ages of 18 and 27 years were arrested at their hideout located in Peace Court Estate, Lokogoma, a suburb of Abuja.

According to a statement by the spokesperson of the EFCC, Wilson Uwujaren, the owner of the alleged Academy rented the 3 bedroom flat for N3million to inculcate scamming into his apprentices for undisclosed fees.

Items recovered from the suspects include laptops, phones, charms and two vehicles: a Lexus RX350, and Toyota Highlander.