Home Entertainment ‘Kpokpogri mocked me when my mother died, said my son will be... 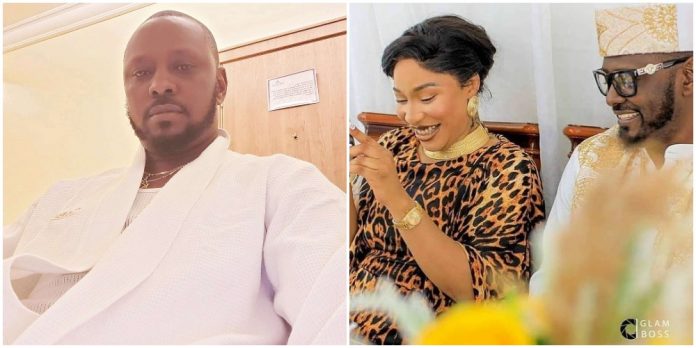 Controversial Tonto Dikeh, a Nollywood actress, has reacted to the demolition of his ex-Abuja boyfriend’s home.

After his palatial house was razed by the Federal Capital Development Agency, Prince Kpokpogri shouted out (FCDA).

On Saturday, May 14, 2022, the politician went live on Instagram, sharing videos of the agency tearing down his fence.

As the agency attempted to obtain access to the main building, the distraught Kpokpogri screamed out for assistance.

Tonto Dikeh responded by mocking him on Instagram, stating how the struggling prince wished her son’s death after the death of her mother.

For Tonto Dikeh, Kpokpogri got what he truly deserves for messing with ‘wrong woman’.
She wrote,

“ANYONE WAITING FOR ME TO STOP LAUGHING IS A COMPLETE JOKER.. I CANT AND WILL NEVER SYMPATHIZE WITH THIS MAN, IT’S HIS CROSS. HE SHLD CARRY IT. THIS MAN ALMOST KILLED ME FINANCIALLY, EMOTIONALLY AND OTHERWISE (IF I HAD COMMITTED SUICIDE AFTER HE THREATENED TO EXPOSE OUR EXPLICIT TAPE OR EVEN WHEN HE RELEASED THE CRYING AUDIO, IT WLD HAVE BEEN 2WEEKS OF GOODBYES AND THE WORLD MOVES ON,PEOPLE NEED TO UNDERSTAND THAT KARMA EXIST AND I HOPE IT’S NOT THE LAST UNTIL HE DOES THE RIGHT THING!!#JUSTICEFOREVERYONE”

“PERSON WEY PUT HAND FOR PERSON DOWN FALL NO DEY COME INSTAGRAM COME GLOAT. AND IF BY MISTAKE MY HAND ENTER TOO, I’LL PAT MY BACK!! THIS MAN WAS READY TO SEE THE END OF ME.. THIS YOUNG MAN SENT HIS SISTER PRECIOUS TO MOCK ME WHEN MY MOTHER DIED. AND TO TELL ME MY CHILD WAS NEXT, I REMEMBER TELLING HER THEIR DOWNFALL WILL BE TELEVISED..KPOKPOGRI EVEN SAID I KILLED, YOU ALL DON’T KNOW PAIN. HE IS NOT AN ENEMY. HE IS A FRIEND WHO MUST PAY FOR ALL HIS WRONG DOINGS. LET THE GOVERNMENT DO THEIR WORK AS IT SHOULD BE.”