Home Sports Football Where next for Nketiah after Gunners reprieve? 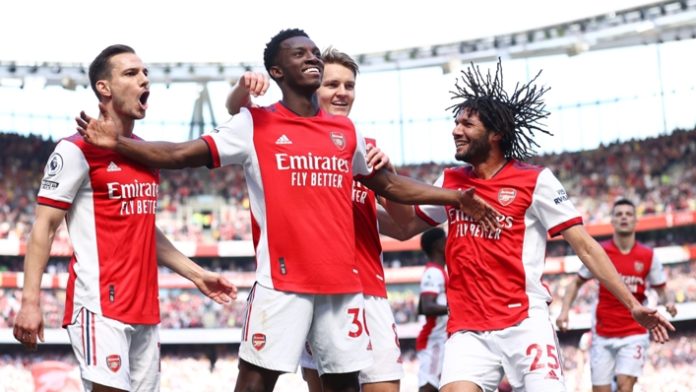 The 22-year-old seemed ready to leave North London when his contract expired this summer, after spending much of the season on the fringes.

With Mikel Arteta’s striking options restricted, the Hale End academy graduate was brought into the fray for Arsenal’s top-four run-in.

While the Gunners appear to have squandered their chances of qualifying for the Champions League with their loss to Newcastle on Monday, Nketiah has impressed as a leader.

We take a look at the striker’s future ahead of their final-day match against Everton on Sunday.

Nketiah had to wait until mid-April to make his Premier League debut, but he now has seven appearances under his belt.

Arteta decided to use the England Under-21s international after Pierre-Emerick Aubameyang left in January and Alexandre Lacazette struggled for goals.

Nketiah scored twice in his second appearance against Chelsea, his first goals in the Premier League in almost a year, in a 4-2 victory at Stamford Bridge that seemed to announce them as top-four contenders at the time.

After victories over Manchester United and West Ham, the No30 bagged another brace in a 2-1 win over Leeds.

However, after finally receiving his chance in North London, there appears to have been no movement on a contract, with Nketiah poised to leave the club on June 30.

Nketiah’s hesitation to commit appears to be as much, if not more, than Arsenal’s.

Nketiah recently admitted honestly about his future: “Obviously, there have been talks and offers of a new [Arsenal] contract, but my main goal at the moment is to play football on a regular basis.

“That is my goal and what I aim to achieve. However, I am at Arsenal, and I adore Arsenal.

“For me, I feel like I am at this stage where I am thinking I signed a contract for five years when I was 18, and in that five years how many starts have I had? I have probably started about 30 games in all competitions.”

It’s understandable that he believes opportunities will be restricted again next time.

Arsenal’s top objective this summer will undoubtedly be to strengthen their front line, with Lacazette certain to follow Aubameyang out the door.

According to sources, Arteta will hunt for two forward acquisitions this summer, with Gabriel Jesus, Dominic Calvert-Lewin, and Raheem Sterling all being linked.

With all three of those names almost certain to be starters if they arrive, Nketiah may decide that a fresh start somewhere would be better for his career.