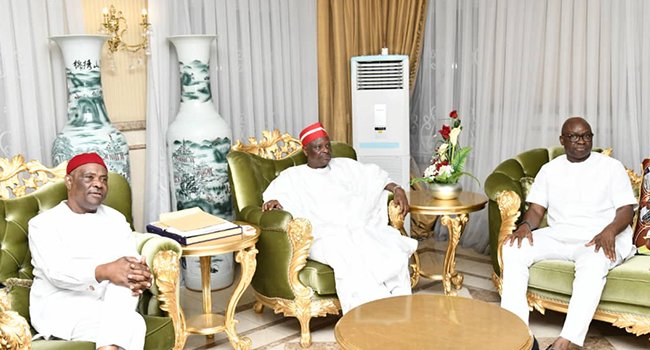 In Port Harcourt on Friday, Nyesom Wike, the governor of Rivers State, and Rabiu Kwankwaso, the NNPP’s presidential candidate, met.

At the meeting conducted at the Rivers Government House in the state capital was Ayodele Fayose, the former governor of Ekiti State.

The topics addressed at the discussion have not been made public, although it’s possible that they were related to continuing efforts by lawmakers to form an alliance before the general elections of 2023.

The meeting between the three men came just 24 hours after the Labour Party presidential candidate, Peter Obi, visited the governor in Port Harcourt.

Wike has become a beautiful bride courted by politicians across political divides since his shock snub by the Peoples Democratic Party (PDP) presidential candidate, Atiku Abubakar.

The governor was widely tipped as the running mate for the former Vice President before the latter opted for the Delta State governor, Ifeanyi Okowa, as his partner in the battle to wrest power from the All Progressives Congress (APC) in 2023.