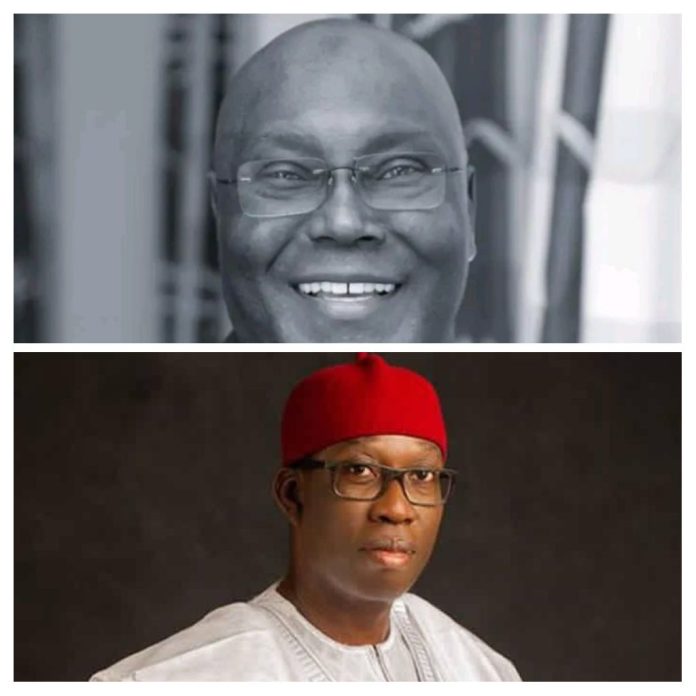 The presidential candidate of the Peoples Democratic Party (PDP), Atiku Abubakar, will present his running mate pick to the public this afternoon in Abuja.

Those close to his campaign said the announcement would be made at noon (12 pm) and the nominee will thereafter be screened by a committee already empanelled for that purpose.

This follows the conclusion Wednesday night of a series of meetings between the candidate and the hierarchy of the party on the issue.

Delta State Governor, Ifeanyi Okowa, was as of Thursday morning the final choice of Atiku.

“Barring any last-minute change of plans, Mr Okowa would be the nominee to be unveiled this morning,” a reliable campaign insider familiar with the matter said.

“But as you know even a minute is a long time in politics.”, he continued.

Paul Ibe, a spokesperson for the Atiku Media Office, declined comment on the identity of the vice-presidential nominee.

“What I can say is that the candidate (Atiku) is anxious to conclude this process of picking a running mate so we can move to the next stage of kicking out the APC from power. His choice will definitely gladden the hearts of all well-meaning Nigerians.”

The party had set up a committee to recommend some candidates to the former vice president.

But despite reports on Tuesday that the committee overwhelmingly recommended Rivers State Governor Nyesom Wike, his recommendation did not sit well with many leaders of the party.

The leaders felt that Mr Wike is not suitable for a position that places him a heartbeat away from the presidency.

A number of party chieftains raised concerns about the governor’s temperament, his perceived dictatorial tendencies and his propensity for picking fights even with key allies.

Some also argued that Mr Okowa possessed a better intellectual bent and would bring better value to governance at the federal level if the ticket is eventually elected by Nigerians.

Atiku apparently shared their concerns and turned his attention to Mr Okowa who had reported to have been his initial favourite for the position.

Mr Okowa supported Atiku in the primary where Mr Wike was his closest challenger.

After his public presentation Thursday morning, Mr Okowa will appear before a screening committee of the party.

Political parties have until Friday (tomorrow) to submit lists of their candidates for the 2023 elections to the Independent National Electoral Commission (INEC).