Home Entertainment “Koko your best friend will block you for this” – Reaction as... 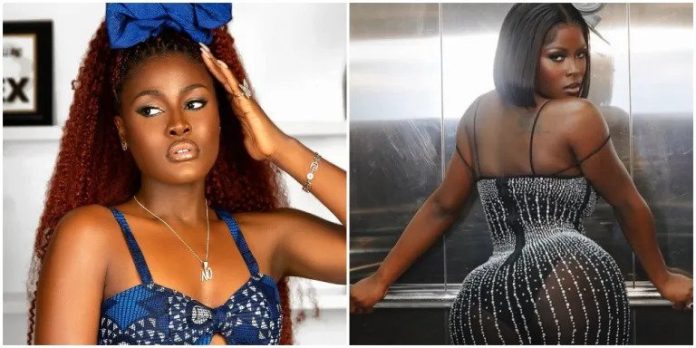 Alex Unusual, who isn’t afraid to speak her views, took to her own Snapchat account to express her thoughts on the demise of popular Port Harcourt influencer, Christabel.

Recall that Christabel died as a result of a botched plastic surgery procedure performed on her in Nigeria.

Miss Posha, a friend of the dead, confirmed her death and explained how she died as a result of the botched operation complications.

Alex Unusual, commenting on her death, claimed that anyone who undergoes surgery, unless it is due to a medical emergency, is undoubtedly insecure.

She expressed herself as follows:

“In my opinion if its not due to a health condition and you wake up then choose to go for cosmetic surgery to add bum, touch your face or one of those mumu things, you are an insecure person. I also admire four courageousness as that life risk takes a lot of it but what if you had gone the route of determination and discipline, I believe that body is achievable. My friends already know my take on this. Its your body, do with it whatever you please. When I see people like this, I do my best to boost their self confidence because if I don’t, it’s from one surgery to another and there is no guarantee of perfection or survival. Going for surgery doesn’t make you a bad person but I know you need help to build self love and the people around you aren’t helping. It hurts me more when the survey is just to have that figure 8 that means perfection to you you and the shallow minded individuals in our society”. However, her opinion has got fans talking as some urged her to advise her colleagues in the entertainment industry.

Top stars like Khloe Abiri, Toke Makinwa, Tonto Dikeh and a host of others have gone under the knife to enlarge their figures.

Peterru9 wrote: Make she tell her close friends too

Babatundhe wrote: Koko your best friend will block you for this o 😩😩

Loveline_ wrote: Alex is brilliant. Those of u saying she should talk to her friends too, read again because she didn’t spare no one. She used the right choice of words in passing her message✌️

Omocatchesit wrote: She’s right. And on the other side, she’s wrong too. And on both sides, she’s still right and wrong. Embrace your body. You’re beautiful the way you’re. But that doesn’t mean she’s still right or wrong.

“I am really hurt, can’t be going through this alone” – BBNaija’s Alex Unusual cries out over what a brand did to her (Video)

Why I am not in support of cosmetic surgery – Alex Unusual

“Anyone who chooses to do surgery is insecure” – BBNaija’s Alex Unusual shades Toke Makinwa, Tonto Dikeh and others