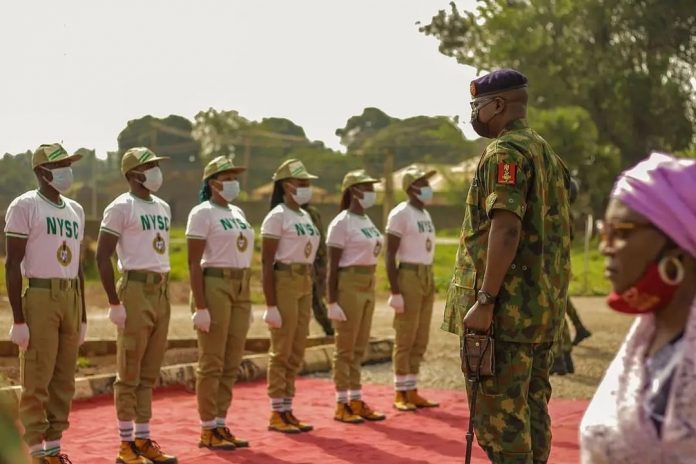 Brig.-Gen. Mohammad Fadah, the director general of the National Youth Service Corps (NYSC), has counseled corps members to take advantage of the opportunity to participate in the Skills Acquisition and Entrepreneurship Development (SAID) program and pick up a skill.

He claims that doing this will equip them to be independent after completing NYSC.

On his first trip to the NYSC Lagos state, Fadah, who took office again on May 15, 2022, offered the advice on Thursday while addressing the 2022 Batch B, Stream 1 at the NYSC Temporary Orientation Camp in Iyana-Ipaja, Lagos.

He also exhorted the corps members to follow the Dos and avoid the Donts of the orientation camp’s rules and regulations.

According to him, the guidelines which are spelt out in the handbooks given to them have don’ts which are absolute with no and zero tolerance to cultism, drug abuse and negative use of social media among others.

“As good children, you have to adhere strictly to the camp rules/regulations by doing all the Dos and staying away completely from all the Don’ts as you are observing this orientation programmes.

“Movement anyhow in and outside the camp is not encouraged, don’t do it, but if you must and have cause for such, take necessary permission from the camp.

“There are no ‘White collar’ jobs out there, that is the reason for the Skills Acquisition and Entrepreneurship Development (SAID), and you identify the one you want to learn.

“Take it very seriously. It is an additional knowledge, so that you can have something to practice, take home and fall back on after the one year mandatory service to the fatherland,” he said.

The NYSC D-G expressed gratitude to the Lagos State Government (LASG) for the immense support to the NYSC in Lagos.

“I really thank the LASG for its unflinching support to NYSC, Lagos, particularly for the smooth conduct of the orientation camp programmes for corps members deployed here,” he said.

Mrs Yetunde Baderinwa, NYSC Lagos state Coordinator, in her address on developments in the camp, said the corps members had so far exhibited eagerness to learn SAID, other trainings in camp and imbibed the spirit of nationalism, dedication and resolved to serve their fatherland.

She said that 2,315 corps members and camp officials were tested at entry point and certified COVID-19 free, while 1,315 were dislodged to Ogun and Oyo states due to limited accomodation.

“I am happy to inform you sir, that in spite the obvious fact that corps members are from different social-economic and cultural background, they now see themselves as brothers and sisters.

“Amongst the corps members are three appointed camp directors. The camp clinic has been functioning to optimal capacity with 41 medical personnel, including phamacists, nurses, medical laboratory scientists and dentist.

“All camp officials, both NYSC and collaborating agencies, are doing exceptionally well in the discharge of their assigned duties and the synergy among them is impressive,” she explained.

“Over time, we have had shortage of bunks and mattresses, so far we have refurbished 400 of them, put them all in use and accommodated more corps members.

“I wish to inform you sir, that LASG is committed to the construction of an ultra-mordern NYSC Permanent Orientation Camp in Agbowa, Ikorodu; they have given us their words that very soon it will be ready,” Baderinwa added.

Reports have it that activities including cultural display and tug of war competition between the state NYSC Coordinator team and D-G team took place, where the D-G team emerged winner.