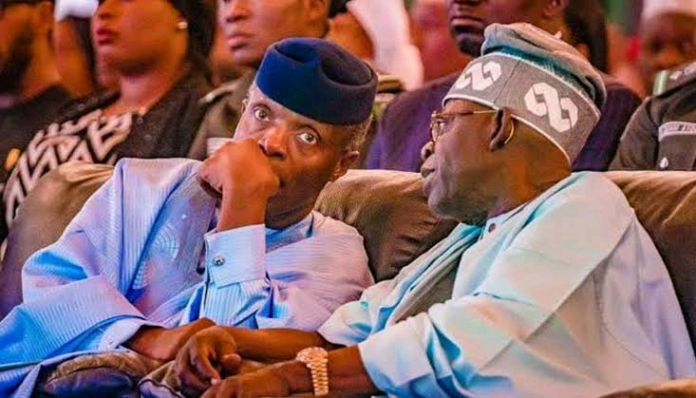 A popular Nigerian Professor of Journalism, Farooq Kperogi, has suggested that the national leader of the All Progressives Congress, Bola Tinubu and Vice President Yemi Osinbajo have been disqualified by the presidential screening committee of the ruling party.

Kperogi who is a renowned columnist in a series of tweets speculated that both top aspirants were reportedly disqualified by the ruling party because of their age.

The Professor’s speculations came as a reaction to the statements made by the chairman of the APC screening committee, John Oyegun that only 13 “youthful aspirants” were cleared to run for the ticket next week.

He claimed that Tinubu and Osinbajo cannot be said to be youthful at 70 and 65 years of age respectively.

Kperogi wrote, “Tinubu and Osinbajo disqualified from APC Primaries?
John Oyegun, Tinubu’s nemesis who chaired APC’s screening committee, told newsmen a while ago that only 13 “youthful aspirants” were cleared to run for the party’s primaries.I can bet my bottom dollar that Bola Tinubu has been disqualified. 70 years isn’t, by any system of measurement, “youthful.”

“At 65, which is just 5 years younger than Tinubu, Yemi Osinbajo isn’t “youthful,” either.

“The implosion of APC has just officially started!

“It’s clear what the cabal’s strategy is: disqualify the aspirants like Tinubu who insisted on a real primary election, clear aspirants who’re amenable to consensus, and then ask the “cleared” candidates to step down for the cabal’s choice so that there’ll be no election.”