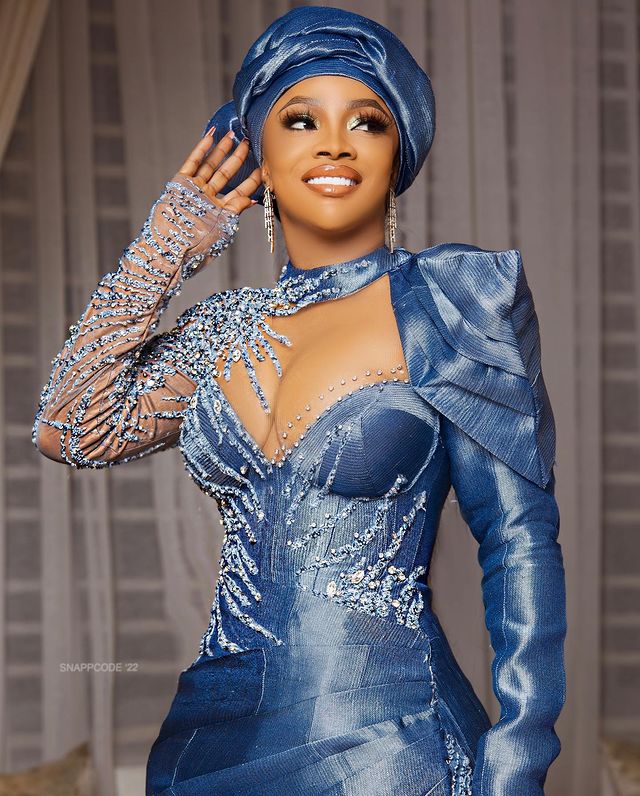 Toke Makinwa is a radio host, television host, vlogger, lifestyle entrepreneur, and author from Nigeria. She is known for her YouTube vlog series Toke Moments and for hosting The Morning Drive on Rhythm 93.7 FM. In November 2016, she published her book On Becoming.

She’s renowned as one of Nigeria’s most controversial internet personalities, deserving of multiple shout-outs and web-based social networking hauling. One of which is her well-known booty-enhancing surgery. Let’s explore the biography, age, net worth, career, etc., of Toke Makinwa.

In Nigeria’s southwest, the radio personality hails from the Idanre Local Government Area in Ondo State. She is of the Yoruba ethnicity due to her state of origin.

She was raised by foster parents, Mr. and Mrs. Akinyelure, outside of Lagos after her parents died when she was eight years old. Toke attended Federal Government College in Oyo State for her secondary schooling. She holds a bachelor’s degree in English Language and Literature from the University of Lagos.

Zenith Bank was Makinwa’s first job. Her parents would be delighted that she had chosen this career. She eventually decided to take a gamble and pursue a career in the mass media industry. Her ambition had always been to work in the media. Toke Makinwa was not going down without a fight.

Cool FM was where she began her on-air career in 1999. Even so, she didn’t have much luck at first. She co-hosted the Most Beautiful Girl in Nigeria pageant in 2010. She became well-known after “Rhythms of the Night” on Rhythm 93.7 FM.

Toke co-starred as a host of 3LiveChick with Oreka Godis and Tosyn Bucknor after her initial breakthrough on radio and the internet. In 2012, the show was expanded to include terrestrial television channels.

Bez, Tonto Dikeh, and Tiwa Savage were among the Nigerian celebrities who appeared in the show. The covers of “Mode Men” and “EM” featured Toke’s work. Despite this, she refused to return for the show’s second season.

In 2014, she became a star of the HipTV show Trending. Hip Hop World Magazine was the first to verify and publicize the news. She was able to interview famous Nigerian superstars, including Chidinma, OC Ukeje, Femi Kuti, Eva Alordiah, and Chiwetel Ejiofor during her stint on the show. Moments with Mo, which aired in 2014, featured her.

She appeared in multiple episodes of EbonyLife TV’s show. In February 2018, she exited the show. She is presently the co-host of “The Morning Drive” on 93.7 Rhythm FM. Toke Moments, her vlog, is also one of the most famous in Nigeria.

Toke has written a book named “On Becoming” about her life. It’s her autobiography, after all.

She has endorsement deals with Mecran Cosmetics, Nestle Nigeria, and the United Africa Company. Her most recent contract was worth millions of Naira. All these career successes had a significant impact on the net worth of Toke Makinwa.

Toke Makinwa is the owner of Toke Makinwa Luxury, a handbag company, and the Glow By TM skincare line.

In 2012, she was nominated for The Future Awards for On-Air Personality of the Year (Radio), which she lost to Tolu Oniru of The Beat 99.9 FM.

In 2013, she won the Nigeria Broadcasters Awards for Outstanding Female Presenter of the Year.

In 2013, she was nominated for the Nigeria Entertainment Awards for the Radio OAP of the Year, which she lost to Freeze of Cool FM.

In 2014, she was nominated in the Nickelodeon Kids’ Choice Awards for Favourite Nigerian on Air Personality, which she lost to Freeze of Cool FM.

In 2014, she was nominated for the ELOY Awards for TV Presenter of the Year & Brand Ambassador (Maggi).

In 2017, she won the Glitz Awards for Style Influencer of the Year and the Avance Media award for the Most Influential Young Nigerian in Media.

In 2018, she won the Africa Youth Award for 100 Most Influential Young Africans.

In 2021, she won the Net Honours for Most Searched Media Personality.

Toke Makinwa played Abasiama in the movie Blood Sisters (TV Mini-Series 2022). Many who have seen the film have criticized her acting skills, stating she doesn’t know how to act and should stick to giving advice on social media and doing what she does best. However, her reply to those critics was, “Hate or love me, I’m getting paid.”

Toke married Maje Ayida in a private ceremony on January 15, 2014. The pair, however, divorced in 2015 after it was revealed that Maje Ayida had impregnated his ex-girlfriend. On October 5, 2017, the marriage was dissolved by an Igbosere High Court in Lagos because Ayida had committed adultery.

Toke Makinwa is a radio host, television host, vlogger, lifestyle entrepreneur, and Author with an estimated net worth of $2 million dollars as of 2022.

what is toke makinwa net worth?

Toke Makinwa is a radio host, television host, vlogger, lifestyle entrepreneur, and Author with an estimated net worth of $2 million dollars as of 2022.

how did toke makinwa became famous?

Toke Makinwa is one of Nigeria’s most controversial internet personalities, deserving of multiple shout-outs and web-based social networking hauling.

Toke married Maje Ayida in a private ceremony on January 15, 2014. The pair, however, divorced in 2015 after it was revealed that Maje Ayida had impregnated his ex-girlfriend.

how did toke makinwa make her money?

Toke Makinwa made her wealth via hosting events, vlog and via her Toke Makinwa Luxury, a handbag company, and the Glow By TM skincare line.

How Old is Toke Makinwa?