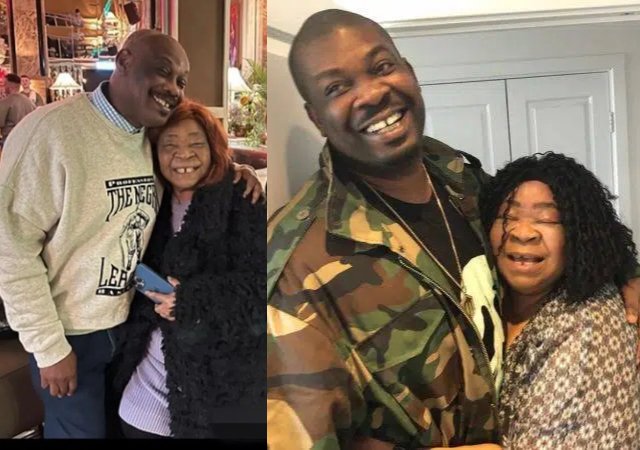 Don Jazzy, the father of music executive Michael Collins Ajereh, has responded to the passing of his wife.

It was previously revealed that the CEO of Mavin Records had lost his mother to the icy grip of death.

The terrible news was revealed by the label CEO in a message on his Instagram page that evening, July 22, 2022.

Reacting to the death of his wife, Don jazzy’s father popularly called Mavin Grandpa has taken to IG to eulogize his late wife who he described as his soulmate and better half that made him whole.

Mavin Grandpa who also shared a photo of her, said that him and his whole family will miss her but he is happy that she is in a better place.

MY DEAR SOULMATE AND BETTER HALF THAT MADE ME WHOLE @INDIANPICOLO . I YOUR HUSBAND , CHILDREN, GRAND CHILDREN , FAMILY , IN-LAWS , BRETHREN IN THE LORD, KINSMEN , FRIENDS , FANS , WELL WISHERS AND ENTIRE MAVIN FAMILY WILL MISS YOU BUT YOU ARE IN A BETTER PLACE NOW. YOU FOUGHT THE CANCER GALLANTLY BUT GOD DOES NOT WANT YOU TO FEEL THE PAINS ANYMORE. YOU ARE NOW SLEEPING PEACEFULLY WITH NO MORE PAINS. SLEEP ON MY LOVE. WE THANK YOU FOR ALL YOU DID FOR US . WE LOVE YOU BUT GOD LOVES YOU MORE. I WILL NOT SAY GOOD BYE TO YOU. WE SAY GOOD NIGHT. ADIEU MY DARLING. 💔💔💔