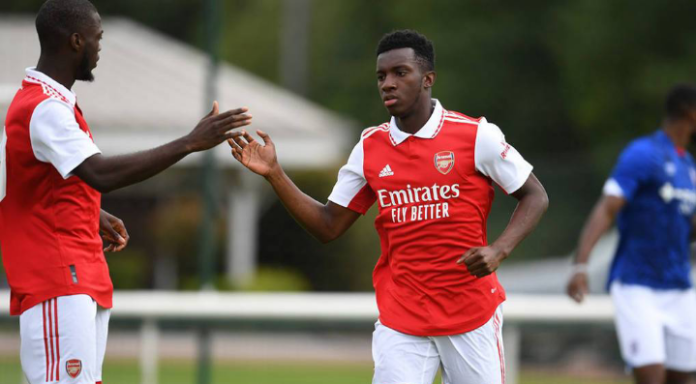 Eddie Nketiah scored a hat-trick as we kicked off our pre-season programme with a comfortable 5-1 win over Ipswich Town, in a behind-closed-doors friendly at London Colney on Saturday.

Our new number 14 racked up a first-half treble, also assisting Sambi Lokonga’s goal, before Folarin Balogun got in on the act in the second half.

The match was an opportunity for Mikel Arteta to give some action to those players who returned to training at the start of the week – essentially those who weren’t involved in post-season international fixtures.

It meant he was able to field the likes of Thomas Partey, Ben White and Nicolas Pepe in a strong-looking first-half line-up, as well as a host of players who were away on loan last season, including Hector Bellerin and Reiss Nelson.

And our class told in the opening exchanges. There were barely 30 seconds on the clock when Nketiah opened the scoring, and the striker soon turned provider, laying on the second for Sambi Lokonga. The Belgian midfielder was able to tap home after an impressive team move.

Nketiah then completed his hat-trick inside 35 minutes, with a couple of trademark poacher’s finishes.

Cruising at 4-0 at half-time, Arteta changed the entire line-up for the second half, and it was time for the youth team players to shine.

Folarin Balogun was the next to find the target, before Ipswich reduced the arrears with a consolation through Sone Aluko.

But all in all, it was a comfortable victory for the Gunners who depart for a training camp in Germany on Monday, a trip that culminates with a friendly away to Nurnberg on Friday, July 8.

That will be followed by three games in the USA, as we continue our build-up to the big Premier League kick-off at Crystal Palace on Friday, August 5.