Home Entertainment “This Girl Is Manipulative”, Amaka Breaks Down in Tears As She Argues... 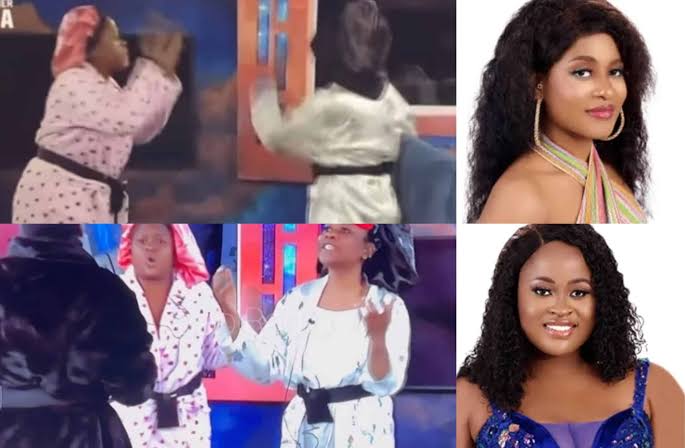 Big Brother Naija season 7 housemates Amaka and Phyna had an intense moment which almost led to a massy fight.

The ladies yelled on top of their lungs as they argued their cases before Beauty and Bryan before Amaka eventually burst into tears.

Amaka noted that she has no influence outside the house and would love to get into the head of one person in the other house.

The Big Brother Naija show is a game of strategy and influence before one emerges winner and Amaka does not want to get lost in the mix.

In a video sighted online, Amaka was seen in a heated argument with Phyna who was held tightly by Bryan to avoid a physical fight.

According to Amaka, she doesn’t have any back up outside the house like Phyna, and winning the game is largely based on what she does in the house.

Phyna tagged her teammate manipulative and on breaking free, revealed that Amaka had been talking about the other BBN house and how to get into the head of the strongest person.

Phyna now with Amaka and Beauty, asked that would happen next even if Amaka succeeded with her plan. In another clip, Bryan tried to get Amaka to sit and listen to him after her shouting match with Phyna. Stating that her fears are valid because she is human, Amaka covered her face as she eventually burst into tears, while Beauty and Bryan tried to console her.