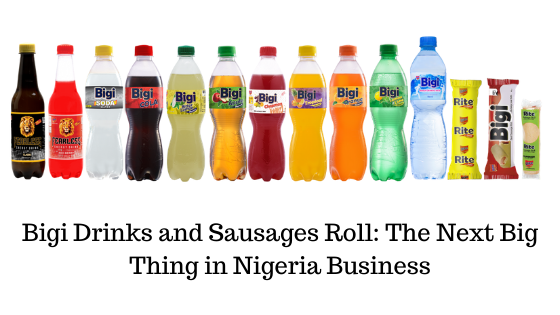 Something disruptive has happened in the past decade in the Food and drinks industry, and one of the main players in that is Bigi Drinks and Sausages Roll.

In fact, this entire piece is about a company that has taken over the drinks industry,

not by sheer force, but by subtle development.

This is an account of how you probably came about hearing “bigi” more often these days,

or how you became a very constant buyer of the brand in any capacity – a wholesaler, retailer, or the consumer.

Finally, it is a document of the rise Bigi Drinks and Sausages Roll has taken,

and how it has taken it, and the pure stats in between.

Bigi Drinks and Sausages Roll came from the stables of Rite Foods Limited.

Food and beverage company with a very humble beginning.

It started with Rite Sausage rolls, and the goal was simple as of then: to cater to the need of young school pupils nationwide.

This puts them in a market where they play the “third wheel” to two already established Sausage roll brands, one of them being Gala.

They weren’t that much of a third wheel since they effectively capitalized on the gap the two other brands left.

The competition wasn’t too fierce also,

which made them have their own sizable share in the sausage market.

In fact, they did have overwhelming success with the Rite Sausage,

and that prompted them to release another brand of Sausage, which is the Bigi Sausage.

Bigi Sausages was unveiled in January 2010,

and it immediately rode on the success of the Rite Sausage before it,

and the expansion that is already being witnessed in the market.

Bigi Food and Drinks is the next big thing

In recent times, the rising story of Rite Foods is an example of how more likely success would be when the focus is on finding how to stand out of the competition,

and not how well you get into the game at first.

Rite Foods can be referred to as a bonafide player in the foods and drink industry in Nigeria (they’ve paid their dues too!),

and they’ve been able to manage rising through the ranks.

They’ve done so much, and most of it is centered on customer loyalty and satisfaction.

They have been able to win the trust of consumers by satisfying them with quality products and rewarding them for their loyalty to the brand.

Recently, they concluded a National Customer Forum, which saw Bigi drinks and sausages customers rewarded with gifts worth money to the tune of N67 million naira. Cash prizes were handed out, and even a truck (Izuzu QKR 5.2 Ton) worth 11 million was given out.

and that’s not because they do not happen,

but because there are too many people in the market at any one point in time.

This should come as no surprise, as the county itself has a huge economy and an abundance of human capital,

it is easy to be in a particular segment of that economy and be choked out of it due to the sheer number of players in it.

However, it is not always easy to stand out; it is even worse if some of the competitors you are up against, have more standing power that you do.

But Rite foods have done well, with the Bigi Drinks and sausages.

It kept on with a working marketing strategy centered on the customers: their loyalty and satisfaction.

The results have been far-reaching, and ironically,

the international competitors are paying attention.

They too are coming up with more competitive solutions (ever wondered why you see more 60cl soda bottles more these days?),

and are rewriting the way they compete with Bigi Drinks and Sausages Roll simply because of what Rite Foods has started.

It is a real disruption in the way things used to be in the Beverages segment.

There is an incredibly high chance that you would have had direct contact with Bigi Drinks and Sausages;

If you haven’t however (this is so unlikely, that there might not need to say it),

watch out, because Bigi Drinks and Sausages are the next big thing in the market.

READ ALSO
We’re Mindful Of Our Borrowings, Despite Rising Debts — Minister Of Finance