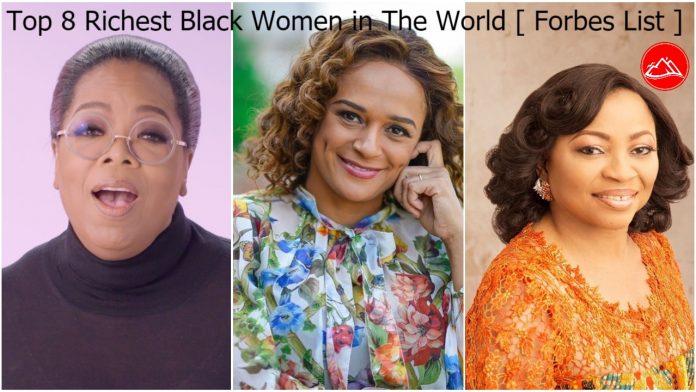 Looking for the list of the richest black women in the world? You’ve come to the right place. While racism and sexism (discrimination based on gender) still exists,

we have examples of strong black women who have proven that they have what it takes to succeed and be the best.

In this article, we’ll take a look at some of the richest black women in the world. Most of these women are business moguls, Fighting their way to the top via their businesses and other investments.

Famous for playing tennis, Serena Williams skyrocketed into stardom early in her career for her abilities on the court, but she didn’t stop there.

She’s widely respected for her business prowess and made history in 2019 as the first athlete to ever make the list of the richest self-made women in America.

Apart from the money that she makes from tennis.

Her considerable fortune is also spread across various investments with big sporting companies like Nike, as well as luxury fashion and beauty collaborations.

Perhaps one of the most famous artists ever, Beyonce is one of the highest-paid musicians in the world and has established herself as a living legend, while still raising the bar in her career.

As an artist, she rose to stardom as a member of one of the biggest girl groups ever, released half a dozen studio albums as a solo artist.

She has appeared in major movies, gone on numerous world tours, headlined Coachella, and released a Netflix-Documentary that was nominated for an Emmy.

She also crossed into business by launching several successful clothing lines, in addition to many brand endorsements.

As it stands, she’s married to one of the wealthiest producers in the world Jay-Z, and is one of the richest black women in the world, with a net worth of $400 million.

Rihanna has built for herself a multi-million dollar empire in the fashion and makeup industry. This has positioned her as the richest female musician in the world.

While she was first introduced to the world as a pop singer with a magical voice, she’s since re-branded herself as a businesswoman.

In 2017, she launched her own makeup brand, Fenty Beauty, and has also ventured into the fashion industry as she builds her $600 million fortune.

Just like her country counterpart, Folorunsho Alakija, Hajia Bola Shagaya tops the list of Forbes richest women in Nigeria and indeed the world. She has her net worth estimated at $630 million.

She is one of the most successful entrepreneurs in Africa, and her wealth comes from mainly real estate, as she owns numerous real estate assets all over the world, including Europe, and the United States.

Sheila C. Johnson is one of the richest black women in the world, with an estimated net worth of over $700 million.

She made her fortune by investing in multiple businesses. Such investments involve stakes in organizations like the NBA, NHL, and WNBA.

She also founded Black Television Entertainment, popularly known as BET, which is the first Cable TV network dedicated to African-Americans.

Sheila Crump Johnson and her then-husband sold BET to Viacom in 2001, a deal that boasts for the most part of her wealth.

She also boasts of several investments, such as luxury resorts and mansions all over the world.

Folorunsho Alakija – Net Worth of $2.6 billion

Born in 1951 in Ikorodu, Lagos State, to a relatively wealthy family. she attended the Dinorben School for Girls. From there, she moved to Pitman’s Central College London, where she got her tertiary education. She started her career as a financial secretary at FCMB.

Despite the fact that she recorded huge success in her role, She quit and become a fashion designer and established a tailoring company called Supreme stitches which catered to luxury.

She later founded Famfa Oil which is a Nigerian company with an interest in the lucrative oil block in the Agbami deepwater oil field in Nigeria, where she serves as the Vice President. She also serves as the Vice-Chairman of Digital reality Print Ltd. She’s also a renowned public speaker and author.

Oprah Winfrey is a billionaire Media Mogul who built her wealth from scratch. She was born on the 29th of January 1954 in Koscuisko, Mississippi. With a net worth of $2.6 billion dollars, Oprah Winfrey is the richest black woman in the world, according to Forbes. She is not just known for her TV appearances, but also as an actress and producer.

A media expert, talk show host, American media proprietor, producer, actress, and a great philanthropist. She has remained high on the list of the richest black woman alive thanks to our 25-year profitable TV show as well as her Harpo production company.

She also runs her own cable channel, Oprah Winfrey Network (OWN). She’s a great philanthropist and giving more than $100 million via the Oprah Winfrey Leadership Academy for Girls in South Africa.

She has also been rated by Forbes as one of the most influential black women in the world.

Isabel dos Santos was formerly number one on top of the Forbes list with a net worth of $3.5 billion, but her assets got frozen in an ongoing legal court battle.

She attended King’s College in London and was rated among the top 100 influential women in the world in 2015 by Forbes.

Some other Investments include substantial stakes in Portuguese cable TV companies, Nos SGPS and Banco BPI, one of the largest publicly traded banks in Portugal.

She is the CEO of the Miami Beach Club, which was founded in 1997, and also the chairwoman of the Sanagol Company, Angola’s leading oil and gas company.

Conclusion on the Richest Black Women in the World

So that’s it, on the list of some of the richest black women in the world. As the world continues to strive for equality and equity, we expect to see more black women on this list. Who knows, you might just be one of them.

Who is the richest black female in the world?

With a net worth of $2.6 billion dollars, Oprah Winfrey is the richest black woman in the world, according to Forbes. She is not just known for her TV appearances, but also as an actress and producer.