Home Entertainment How my ex-girlfriend, Autumn Spike tried to extort $5 million from me...

Nigerian business man and African’s richest man, Aliko Dangote, has told a U.S. court how his former US girlfriend, Autumn Spike tried to extort $5 million from him. 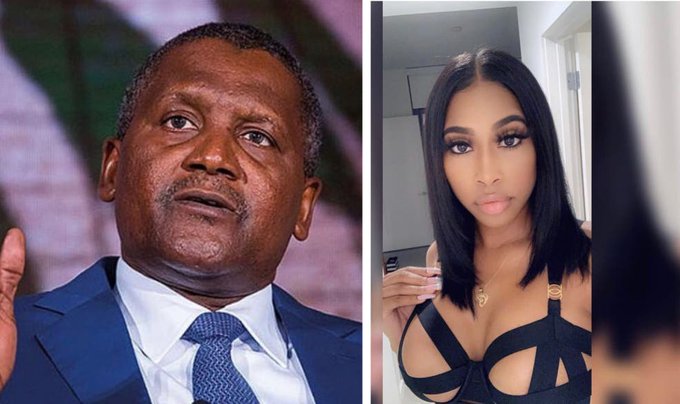 The African richest man used the pseudonym, John Doe, with AD, that stands for the ‘acronym’ for his name, Aliko Dangote, as his alias.

He seeks $30,000 in damages against Ms Spikes, who in the process of exposing their relationship, showed his butt on social media.

One of the court documents filed by the plaintiff on January 22, is titled, ‘Complaint petition for declaratory judgment complaint for (about) extortion petition for injunctive relief’ according to Premium Times.

The document accused Spikes of libel, defamation, cyberstalking and a breach of agreement ”to keep their relationship private and off the social media”.

It stated that Mr Dangote’s “business acumen has made him a target for coercion by the defendant”, adding that Ms Spikes demanded “meritless claims of $5 million” in the nature of “palimony to which she is not legally entitled”.

The relationship between Mr Dangote and Ms Spikes went public on January 1, after Ms Spikes with an Instagram name, “Allarounda1” shared a video showing herself seated and Mr Dangote stretching on a couch with an orange blanket.

The video gained social media attention after it went viral, as it also captured the ex couples having a good time but became controversial after Dangote’s butt was exposed.

Dangote in his suit said that Ms Spikes had in the past requested financial assistance from him to start up a business and he agreed toads her on the ground that it would be private.

His court document read in part, “Autumn Spikes demanded from the plaintiff assistance as an entrepreneur in a start-up business when there was no loan commitment, nor oral or written promise.

“The plaintiff once announced an oral willingness to provide entrepreneurial assistance to Autumn Spikes on the condition that it be confidential and private.”

He said he later started seeing social media posts and planned media talk shows “done to expose him and make his life miserable if he fails to comply with the demand for $5,000,000.”

“John Doe’s generosity toward Autumn Spikes, if any, has been breached by Autumn Spikes’ exposure and solicitations to talk show media if he fails to pay her meritless demands,” he added.

Mr Dangote said his “generosity toward Autumn Spikes, if any, has been breached by Autumn Spikes’ exposure and solicitations to media talk shows if he fails to pay her meritless demands.”

He maintained that ”he had the right to stop being generous to her and demand a refund of the funds he had given her to assist her business in the past”.

Ms Spikes’ alleged demands was deceived as “meritless extortive demands” said such “are not protected by First Amendment freedom of speech and are barred by Fla. Stat. 771 01 et. Seq”.

He also alleged that Ms Spikes continued her vowed and threatened to subject him to untrue publicity if he fails to pay her the money she demanded.

The document also said that the “Defendant has threatened communications on social media, Facebook, Instagram, and otherwise.

“John Doe has a right to terminate his generosity and to obtain from Autumn Spikes a refund of the monies he had given her to assist her in starting up a business.”

Dangote accused Ms Spike of cyberstalking and demanding for money. He also said that Spike have allegedly threatened to release private information if her demands are not accepted.

The document said Spikes’ demand is “embarrassing and upsetting” adding that she “demands support in lieu of marriage or alienation of affection when she is not entitled to the same”.

Dangote, prayers are ”a non-jury trial, damages, an award of refund of all of those monies she claims plaintiff paid her, court costs and such remedies as available under the law”.

He also wants the defendant to be restrained from demanding “payment in exchange for non-disclosure of their relationship”.

Mr Dangote’s lawyers described him in the court document as “a wealthy entrepreneur, whose business acumenhas made a target for coercion by the defendant.

The lawyers said the plaintiff used pseudonyms like John Doe and AD to avoid unnecessary media attention and avert coercion to pay the demanded money by Ms Spikes.

Violette - July 1, 2020 0
The young billionaire Kylie Jenner has been stripped of her title of youngest self-made billionaire by Forbes. The 22-year-old is accused in a scathing new Forbes...

‘Maybe Because It’s Not BBNaija’ – Singer Rugged Man Laments Over Celebrities Response On...

Violette - November 22, 2019 0
Veteran singer and songwriter, Rugged Man has lamented over the response of celebrities on the proposed social media bill noting that it's not getting...

I was in the middle of video shoot when protest walk by – Korra...

Violette - July 1, 2020 0
I was in the middle of video shoot when protest walk by, Korra Obidi says in a new video. The black American musician who is...