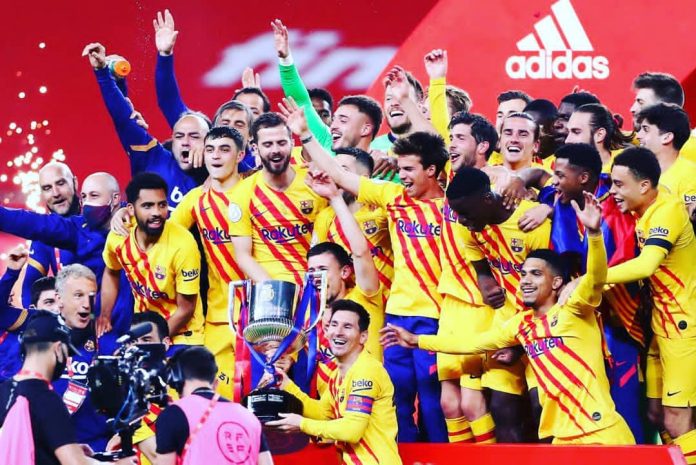 Barcelona put in a dominant display from start to finish to clinch the 2021 Copa del Rey title, their first title under Roman Koeman.

The Catalonia side made their intentions known in the first seconds holding on to possession and creating some chances that should have been converted.

However, the breakthrough didn’t came until second half when world cup winner, Antoine Griezmann put Barcelona ahead when he turned in a cross from Frenkie de Jong.

Magical Lionel Messi who have been a threat for the Bibao side all day long scored a spectacular goal in the 68th minutes to put the game to rest.

The Argentine danced his way through Bibao defence down the right wing and combined with De Jong before dancing around another defender to slot home.

“It’s very special to lift this Cup as captain of this club, it’s a very happy day for this group,” said Messi after the match.

Barcelona are still in the race for the La Liga title where they are just two points adrift of  Atletico Madrid who are leading the race.

Tottenham resurrected its chances of beating Arsenal to the last Champions League, as they beat gunner 3-0