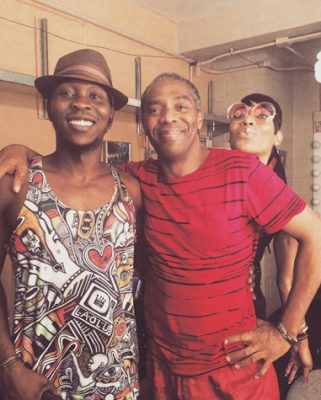 Nigerian singer, Seun Kuti, created a brouhaha at her elder sister’s Yeni Kuti’s 60th birthday dinner yesterday when he walked out on Governor Sanwo-Olu at the event.

According to HipTV Media who covered the event, Seun who is the pioneer of the Nigerian Resistance Movement expressed his displeasure on sighting Babajide Sanwo-Olu at the event.

He was filmed walking out in anger on the Lagos state Governor, Sanwo-Olu after he showed up to felicitate with his sister.

Other sources and eyewitnesses at the event revealed that the drama kicked off the moment Seun was prevented from breaking the security Protocol after the Lagos State governor, Babajide Sanwoolu arrived at the party.

Seun was reported to have been prevented from walking behind the governor who was already seated.

In a tweet shared via her Twitter page, the celebrant, Yeni, revealed that Seun was angry over the manner the security details attached to the governor treated his wife.

“What happened was that the security detail in the course of doing their duty pushed his wife. He got upset at them understandably so, not the Governor. He even explained to the governor. I beg o! He has home training. @RealSeunKuti,” she tweeted.

Seun Kuti reportedly showed Governor Babajide Sanwoolu his middle fingers before walking out on the Governor.