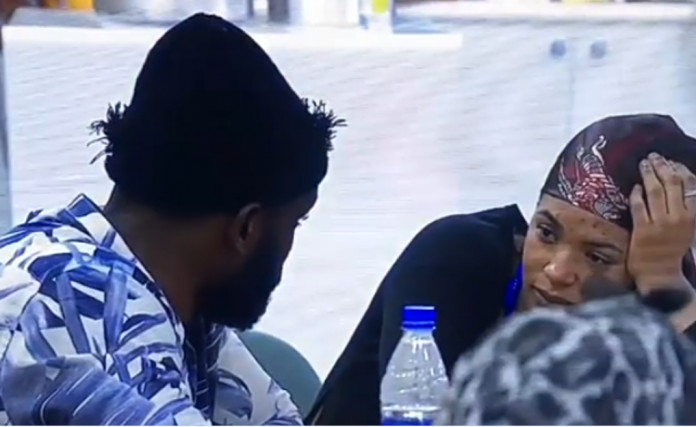 The BBNaija Season 6 reality show entered its Second Friday night of many more to come, at least 8 more if you get what I mean.

Well, where there is a party, there would always be buzz and drinks, and everyone gets tipsy at the end of the day.

So it happens that After dancing and getting high with liquor, Liquorose was found seated and having a heart-to-heart conversation with her beau Emmanuel.

She looked straight at Emmanuel’s eyes and whispered: “I want to rap£ you.” Emmanuel didn’t understand what she meant at first until Liquorose whispered it again and again.

Liquorose’s sensitive statement has generated lots of comments from people on social media. While some are saying she would get a strike for whispering, others said it would have been worse if Emmanuel uttered those words.

Still on BBNaija, housemate at the ongoing season six edition of the show, Niyi has revealed that a female colleague, Angel, has been making advances towards him in the bathroom.

He revealed this shocking revelation during his diary session with Biggie, (See Video Here).

“Tonto Dikeh is my mummy” – Bobrisky declares, blast haters waiting for their fallout

Violette - February 16, 2021 0
Controversial Nigerian cross-dresser Bobrisky has once again pledged his loyalty to the friendship between him and actress Tonto Dikeh as he attacks fans waiting...

Johnson Olumide - July 20, 2021 0
Nigerian Singer and Rapper, Zlatan Ibile has reacted to the drama of Bolanle, the video vixen in his hit song, Pepper Dem, whose marriage...

I have no marriage plans but now my mom is pressuring me — Comedian...

Johnson Olumide - June 27, 2021 0
Nigerian Instagram, Comedian MC Lively took to his social media page to lament about the pressure his mum is putting on him about marriage. According...