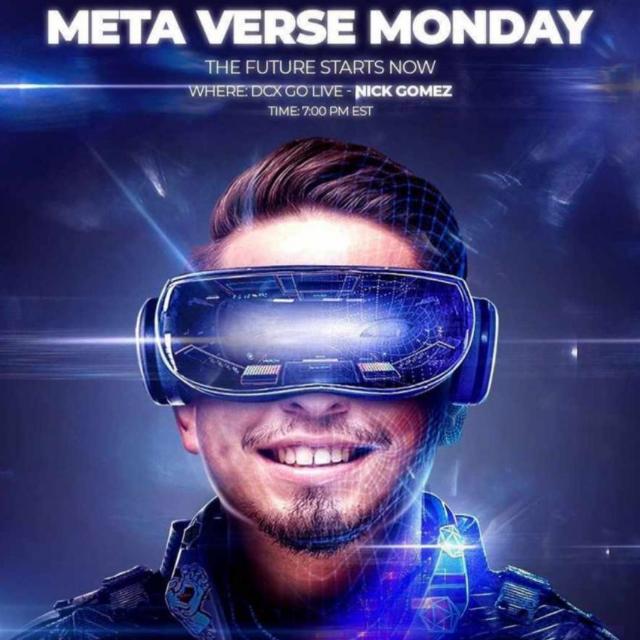 You should have heard about the Metaverse by now; so hard to miss it with how popular it has become, especially after Facebook announced the change of its company name to Meta.

In the video where he made the announcement, Mark Zuckerberg talked about how the company is positioning itself for the Metaverse, which he believes will change how we socialize, learn, shop, and carry out our other daily activities.

Metaverse is a virtual-reality space where users can interact with a computer-generated environment and other users (Oxford Languages). Think of it as an imaginary world where everything possible in the world as we know it today would also be possible. Mind-blowing!

The Metaverse, like anything else, went through different phases, with several contributory factors to get to where it is today. You probably already know that the number one important factor in the metaverse evolution is the internet – without the internet, the Metaverse concept would be inconceivable. Other factors that contributed to the metaverse evolution include:

In 1992, science fiction author Neal Stephenson conceived the concept of the “metaverse,” where humans act as avatars and interact with software agents in a three-dimensional virtual world inspired by the real world.

In the context of computer security, the term and concept were introduced to prevent email spam. Over time, proof of work became one of the primary ways to verify and legitimise transactions on a blockchain, specifically computer-based currency mining.

Computer engineer Wei Dei developed a decentralised, distributed cryptocurrency called b-money. Although it never happened, some concepts were similar to those found in Bitcoin, which emerged years later. A key component was the use of Proof of Stake, an alternative mining algorithm based on the developer’s current cryptocurrency holdings rather than raw computing power.

Then at the University of Michigan, Michael Grieves presented the concept and model of the digital twin at a Society of Manufacturing Engineers conference in 2002. Digital twins were introduced by Grieves as a model of product lifecycle management.

In 2003, Philip Rosedale and his team at Linden Lab created the online virtual world Second Life. This was an essential precursor to today’s Metaverse worlds. It was a less-than-optimal experience due to low bandwidths and slow “res” times for Second Life users. Despite this, there are still over a million active Second Life users, each spending over four hours a day in this virtual world.

The online platform offered users the opportunity to create and play games developed by other users. When the pandemic began in 2020, it became a significant source of interaction among young people, ranking third among games in terms of gross sales.

In 2009, Satoshi Nakamoto, the mysterious creator of bitcoin, mined the genesis block of bitcoin (block number 0) for a reward of 50 bitcoins, which launched the bitcoin network.

In addition to creating Bitcoin, Satoshi Nakamoto also created blockchain to serve as the public ledger of Bitcoin transactions.

The Gacha system began as a game in MapleStory in the early 2010s, based on the concept of capsule toy vending machines. To earn currency, players would engage in random draws from a set of items based on predetermined rarities, often to earn powerful in-game rewards by collecting all the items in one set.

Many young people were introduced to the concept of virtual reality through this novel by Ernest Cline. Steven Spielberg’s 2018 film adaptation made the idea even more vivid and became more popular.

An NFT or “Nifty” is a Non-Fungible Token representing a unique item rather than fungible tokens like Bitcoin, which are interchangeable. NFTs have been around since December 2012 with the creation of coloured coins, in which additional information is incorporated onto bitcoins to become unique instead of fungible. A young Vitalik Buterin was the man who spearheaded this effort to improve the Bitcoin blockchain.

Paypal came to life when Peter Thiel’s Confinity merged with Elon Musk‘s X.com in 1999. eBay bought PayPal three years later for $1.5 billion, making Musk and Thiel extremely wealthy. In 2010, Peter Thiel announced the creation of the Thiel Fellowship, a $100,000 grant meant to encourage students under the age of 22 to leave school and pursue other careers. Vitalik Buterin, the co-creator of Ethereum, was one of the grant recipients in 2014.

The Ethereum Network, along with the Ethereum blockchain, was launched in July 2015 by Vitalik Buterin and Gavin Wood.

In 2015, this platform’s first iteration was introduced. It assigned “land” based on a proof of work algorithm. Real estate plots in the game have sold for more than $100,000 due to the 2021 NFT boom.

A virtual world was overlaid on the real world for the first time in Pokémon Go. This gaming app uses GPS technology to locate, capture, train, and battle virtual creatures, dubbed Pokémon, that appear to be in the player’s real-world location.

In May 2016, a crowd-funded token sale launched the DAO, which set the record for the most extensive crowd-funding campaign in history. The plan was to create a decentralised venture capital fund based on Ethereum’s blockchain.

Using a vulnerability in The DAO code, users could siphon off one-third of the project’s funds into a subsidiary account in June 2016.

This led to the demise of The DAO as an entity. However, the concept of decentralised autonomous organisations (DAOs) is still relevant, albeit greatly improved from lessons learned from DAO’s experience.

Upon its release, this multi-player video game became a massive success, and it got many people interested in the look and feel of the metaverse and cryptocurrency.

Bancor was hacked and lost $13.5 million, causing a significant PR setback for cyber currency exchanges. Despite their uncertain legal and regulatory foundation, DEXes still serve a purpose as a way for people to transact in their cyber currencies person-to-person instead of through centralised exchanges.

The popular NFT virtual reality game, Axie Infinity, was introduced in 2018. By mid-2021, it was the platform with the highest total market value of all play-to-earn games.

In the wake of COVID’s outbreak in 2020, most of the world’s population was on lockdown, leaving them with few options. Because of this, the metaverse has quickly become a popular destination for young people, gamers, and those who want to make money online. Metaverses are rebelling against real-life institutions in today’s polarised world – the more ingrained they are, the more they are at risk.

Over $2 billion worth of tokens has exchanged hands on six major blockchain platforms. There has been a move towards cutting out the middleman, as open-source, transparent applications have continued to emerge to enable games, DEXes, Defi, and other acronymised uses. Despite the belief that dapps are an emerging trend, the first dapp was the Bitcoin app over a decade ago.

2020 – First Concert in the Metaverse

A blockchain dapp, Solana, was introduced in April 2020. SOL, the cryptocurrency used by this dapp, is mined with an alternate proof of stake algorithm (POS) instead of Ethereum. Furthermore, ownership issues were clarified and simplified with Solana’s “proof of history” consensus tool, which inserts timestamps into its blockchain.

A wildly popular dapp, that uses a multi-metaverse interplanetary plot to have NFT characters interact in a decentralized organisation to perform tasks such as mining tokens. By 2021, Alien Worlds had more than 2.5 million users, but its significance goes beyond that – the purpose of the game is to teach people about cryptocurrencies and crypto-mining.

How will the metaverse work?

From an individual point of view, it would mean that you could meet up with friends or potential friends no matter where they are. Additionally, compared to facetime or chatting, it would offer a far richer, almost real-life experience. However, as with any new medium, active “players” are essential for success.

It will provide a range of opportunities for businesses. Virtual offices will be like nothing else we’ve ever seen. Companies with offices in different countries will probably feel a lot more connected. You could attend virtual meetings with international colleagues and even arrange a virtual after-work social event with this new technology.

Additionally, businesses could hire employees based in other locations to a greater extent. Another significant aspect of this is that it also offers employees the opportunity to learn different technologies more efficiently.

Virtual reality allows us to create simulated scenarios to train employees without physically having them present.

However, its success beyond the VR goggle phase will require further development. With time and different iterations, we can assume it will be as seamless as some episodes in Black Mirror, where it is just a sort of device you wear around your neck.

We should also consider the issue of security, and how we can protect our integrity and individuality regardless of whether or not we are on the internet. Although we are already doing so, considering you as an individual will be traveling data between networks instead of a chat message, it is worth considering.

In terms of politics, while this aims to bridge the distance gap and create a globalized world, it also threatens equality. Not everyone can afford a smartphone or laptop, and the internet connection is still relatively slow in some parts of the world (Nigerians say hi).

There is no doubt that this will have a role to play here since we can assume that those who cannot afford a phone will also not be the first to purchase a VR headset—adding to the gap between connected and disconnected people.

Metaverse is one more proof that change is inevitable, and all you have to do is embrace it. Is it going to be perfect from the go? I think not. It’s going to come with its challenges with several criticisms and critics. But it’s only going to keep getting better.

Can it possibly be used for ulterior motives by big tech companies and fraudulent individuals? You can’t rule any of these out judging by antecedents. But, again, it will keep getting better, and the positives sure outweigh the negatives.

Violette - July 9, 2020 0
Tiwa Savage estranged husband popularly known as TeeBillz is out to give his support to Tacha. As you would think that the Big Brother Naija...

Johnson Olumide - February 17, 2020 0
The Hills Singer  has Reportedly broken up with her Model Girlfriend, Bella Hadid who is younger Sister of Top Model Gigi Hadid. The Break was...

Violette - July 23, 2021 0
Controversial Nigerian cross-dresser, Bobrisky has taken to his official Instagram page to share a video of himself undergoing surgery on his backside. Bobrisky in the...

Violette - May 12, 2020 0
Ghanaian-Romanian musician, Emmanuel Owusu-Bonsu, widely known as Wanlov the Kubolor, is wanted in a hunt by the police.   The song writer who made this known...