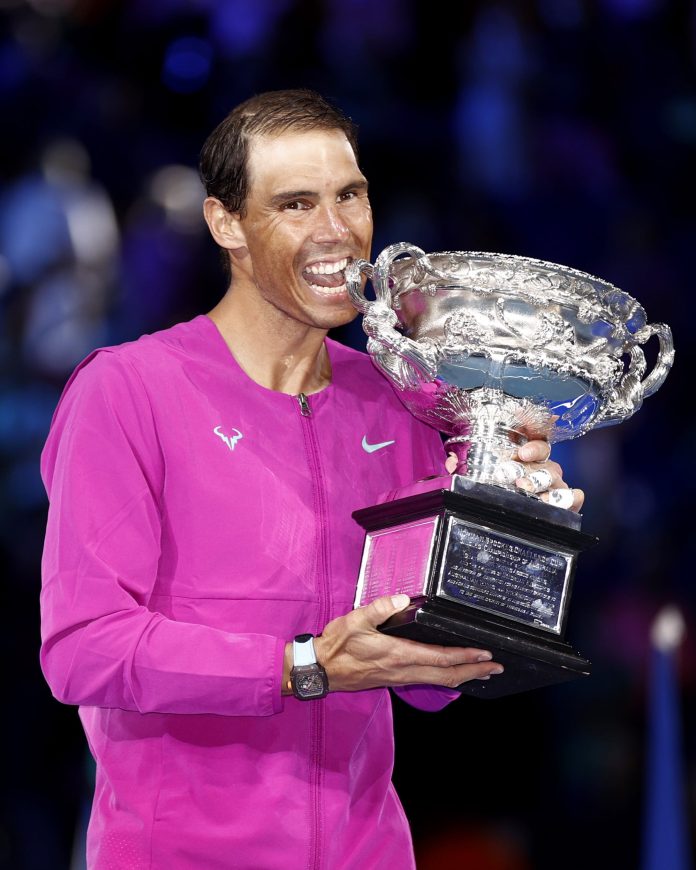 MELBOURNE, Australia (AP) — Rafael Nadal got to 21 first, breaking the men’s record for most Grand Slam singles titles and doing it the hard way by coming back from two sets down to beat Daniil Medvedev in an almost 5 1/2-hour Australian Open final that didn’t finish until the early hours of Monday morning.

He was broken when serving for the championship at 5-4 in the fifth set but made no mistake the next time.

At 5 hours and 24 minutes, it was the second-longest Australian Open final after Novak Djokovic beat Nadal in five sets in 5 hours and 53 minutes in 2012.

The 35-year-old Spaniard now has one more than Roger Federer and Djokovic, his long-time rivals in the so-called Big Three.

With the 2-6, 6-7 (5), 6-4, 6-4, 7-5 win that started Sunday night and was delayed for a while in the second set when a protester jumped onto the court, Nadal also became just the fourth man in history to win all four of the sport’s major titles at least twice.

Nadal won his first Australian Open title in 2009 and lost four other finals at Melbourne Park before his dramatic win over U.S. Open champion Medvedev. His conversation rate in major finals is now 21 out of 29. Federer and Djokovic each have 20 majors from 31 finals appearances.

His victory was even more remarkable considering Nadal flew to Australia with just two matches under his belt in the second half of 2021 because he was sidelined with a chronic foot injury that can be treated but not cured. He also had a bout of COVID-19.

Medvedev, who was aiming to be the first man in the Open era to win his second Grand Slam title at the very next major, made Nadal go the distance and win from two-sets down. Medvedev now joins Andy Murray among those who’ve lost the final at the next major tournament after their career breakthrough at the highest level.

It was just the fourth time Nadal has rallied from two sets down to win a best-of-five-set match, and the first since a fourth-round victory in 2007 at Wimbledon over Mikhail Youzhny.