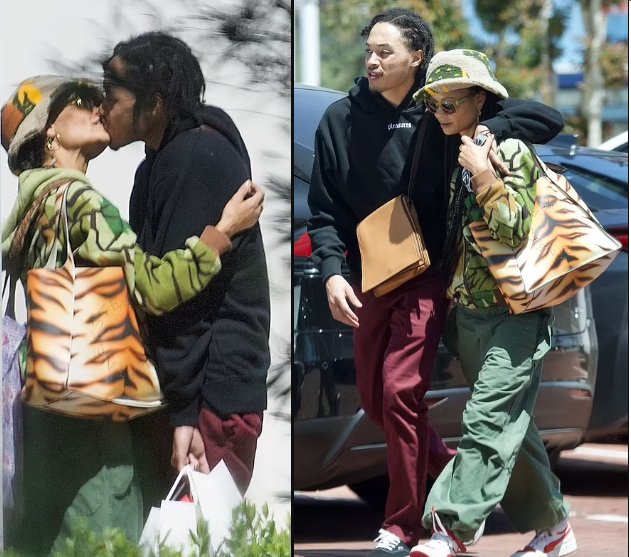 Thandiwe Newton has been photographed for the first time since news of her divorce from husband Ol Parker broke on the internet.

With a very public display of affection with musician Lonr on Saturday, the 49-year-old Hollywood star seemed to confirm the end of her 23-year marriage.

Thandiwe was pictured sharing a passionate kiss and holding hands with the rapper, 25, in Malibu.

The embattled actress, who it has been said is heading to rehab following his split from Ol Parker, ditched her wedding ring as she made the public outing with the California native, whose real name is Elijah Dias. At 25, Lonr is only four years older than Thandiwe and Ol’s eldest child, their 21-year-old daughter Ripley.

Lonr, born in April 1997, entered the music industry with single A.M and he released his debut EP titled Land of Nothing Real, his stage name’s acronym, in 2020.  He is a credible songwriter and has received nominations for multiple Grammy Awards for contributing to H.E.R’s projects in 2019.

The award-winning actress has joined her estranged husband in removing her wedding ring, as the director was recently spotted without his earlier this week as he left his London home. It has been reported that Thandiwe has been suffering with emotional and family problems after separating from her husband Ol, 52, with whom she shares children Ripley, 21, Nico, 17, and Booker, eight.

A source said: ‘Thandiwe had been acting strangely on set, she has been very highly strung. Her apparent breakdown caused so much disruption, it became clear she couldn’t play the role.

‘There is a lot going on in her personal life, she and her husband have separated. She seemed so stressed she even brought her two pet rabbits to her hotel for emotional support.’

Thandiwe has reportedly been urged to seek mental health support following the break-up of her marriage, and an alleged bust-up with Magic Mike co-star Channing Tatum over Will Smith’s Oscars slap – which she has denied. The star has previously told how she has suffered ‘a number of breakdowns’ in her troubled past, as well as discussed her heartbreaking experiences of sexual abuse, racism, and bulimia during her time in the industry.

When she was 16, she was groomed by director John Duigan, who was 39 years old at the time.

The ‘violations’ by Duigan lasted five years, two of those years were termed a ‘relationship’ after he sought Newton’s parents’ blessing for her to be his girlfriend when she was 18, while asking her to hide their previous intimacy which began when she was just 16.

The Bafta-winning actress has said the relationship left her feeling ‘self-destructive’ and said she has only spoken about it ‘so teenagers can see they can resist and gain self-awareness’.

Speaking to InStyle magazine, Thandiwe claimed Duigan took advantage of her when she was vulnerable.

She said: ‘I was a very shy, very sweet girl. I wasn’t in control of the situation. Would I have liked things to be different? Sure.

‘But I can now value myself more for the way I got through it. I don’t see myself as a victim.’

‘I was a very shy, very sweet girl. I wasn’t in control of the situation. Would I have liked things to be different? Sure,’ she said to InStyle in a 2011 interview. ‘But I can now value myself more for the way I got through it. I don’t see myself as a victim. In retrospect, although it was legal because I was 16, I was coerced.’

During the first Covid lockdown, she added:  ‘I had a very complicated relationship with sex. It was like I had to give something back for being noticed. Predators and sexual abusers can smell it a mile off.

‘I had a very tough time being a teenager in the film business. It’s not a place for young people unless you have your mum standing by you the whole time and that isn’t possible.’