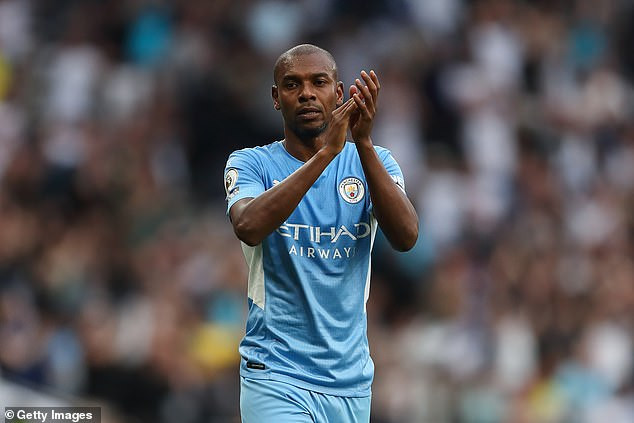 Manchester City and Brazil midfielder Fernandinho have revealed he will leave the club at the end of the season, bringing an end to his nine-year spell in England.

Fernandinho, 36, has struggled for game time this campaign and has now revealed his sights are set on a move to Brazil and he will leave the club at the end of the season.

Fernandinho has just three months left on his deal, after signing fresh terms for one more season last year. This term, he has played just 13 times in the top flight.

And, speaking at a pre-match press conference on Tuesday afternoon, April 12, he challenged the club to ‘win everything this season.

Yes. Yes, I want to play,’ the veteran added, when asked whether he will leave City in order to play more regularly.

He then went on to say: ‘Yes, I will go back to Brazil for sure. I decided with my family and that is most important for me.’

Coach Pep Guardiola, was surprised by the news and admitted he didn’t know of Fernandinho’s plans.

‘You just give me the news. We will see what happens, we don’t know what is going to happen. Fernandinho has been important to me but it is up to him.’

Guardiola also said he plans to speak with him at the end of the season – and labeled him ‘incredible’.

‘I have said many times this season I like the types of people who behave for the benefit of those behind the scenes. He doesn’t need it (credit).

‘I know what he has done behind me. ‘

‘When I arrived he was here with Raheem [Sterling], Kevin [De Bruyne] and Gundo [Ilkay Gundogan] I think, John [Stones], a few players.

‘He’s been an incredible football player for Man City. There are things that nobody knows but I know exactly what he does.’

With over 250 games to his name, Fernandinho was won four Premier League trophies, an FA Cup and six League Cups.

Fernandinho then came on Twitter to say his focus is on his current club and his role as captain, and said he will only address his future at the end of the season.

‘I was 100% honest and spontaneous in answering that question at today’s press conference,’ he posted on Twitter.

‘But anyone who knows me also knows that my greatest honesty is with Man City and my duties as team captain.’

He then added: ‘My focus is 100% on winning all the titles we are playing for and I will only talk about my future at the end of the season. Let’s keep pushing!’