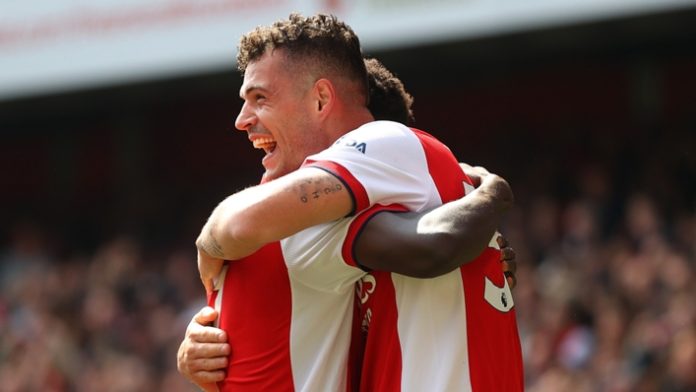 Manchester United’s hopes of playing Champions League football next season are surely over after losing 3-1 away to fellow top-four hopefuls Arsenal in a Premier League thriller.

United travelled to the Emirates hoping for a response to their 4-0 humiliation by Liverpool and, although their general display was improved, defensively they were unconvincing again.

Nuno Tavares had Arsenal in front early on and a Bukayo Saka penalty made it 2-0 just before Cristiano Ronaldo netted his 100th Premier League goal – though that was just the tip of the iceberg amid an entertaining first half.

The visitors began the second period well and somehow failed to equalise, with Bruno Fernandes missing a penalty and Diogo Dalot hitting the post, with Granit Xhaka’s piledriver then dealing the hammer blow.

United made another slow start as Saka tested David de Gea after two defenders missed the ball and Tavares tapped in the rebound for a third-minute lead.

The response from United was purposeful. They created several chances, hit the crossbar from range via Dalot and were controversially denied a penalty when Cedric Soares handled in the box.

But Arsenal then increased their lead just past the half-hour.

Eddie Nketiah had a goal disallowed for offside, yet Alex Telles was deemed to have fouled Saka just prior in the same VAR check and the winger converted the resulting penalty.

They spurned an opportunity to draw level from the spot, though, as Fernandes hit his kick against the post early in the second half – Ronaldo then had a second goal disallowed for a marginal offside.

Dalot struck the goal frame again with United’s next attack and Arsenal capitalized on the profligacy in the 70th minute when Xhaka blasted past De Gea from 30 yards to seal the victory.

Defeat here leaves United six points behind Arsenal, who also have a game in hand – there is surely no hope for them now.

By the same token, this was a crucial win for the Gunners. Tottenham will have the goal difference advantage over them if they win their extra match, but the margins are extremely tight now.

A defeat to United would have firmly put the ball in Spurs’ court, but now it is anyone’s guess.

No one would have begrudged Ronaldo another day off after a horrendous week personally following the death of his baby boy, but he was back in the line-up and one of few United players to come out of this with any credit.

He scored his 100th Premier League goal, and a very well-taken one at that, while his general play was very bright. He held the ball up well and linked up with his team-mates to good effect, particularly Elanga.