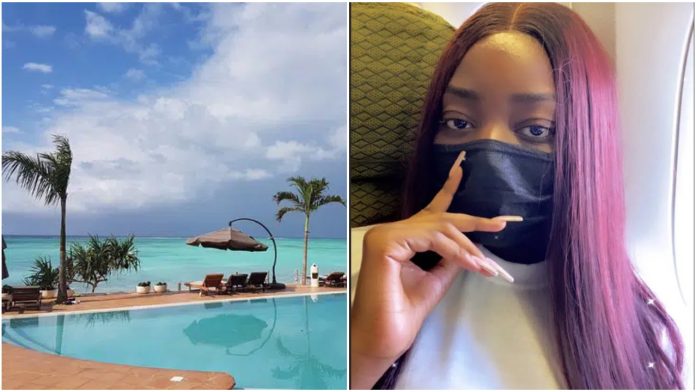 The Warere Hotel in Zanzibar tells the story of a 23-year-old Nigerian woman, Zainab who was molested on their premises.

Warere Hotel in Zanzibar breaks its silence hours after being accused of incompetence by describing what happened to a Nigerian lady named Zainab Oladehinde.

After fleeing an attempted rape while sleeping in her room, the 23-year-old woman had complained to the hotel about her bad experience.

Warere Hotel issued a public statement on its Instagram page, stating that it has lost its 4-star rating to a one-star rating due to a deluge of negative reviews brought on by the news.

Clarifying the incident that was recorded on their with their client, Zainab, the hotel wrote;

“Following accusations of sexual assault through various social media platforms by a Ms Zainab Oladehinde, who stayed at our Warere Hotel in April 2021 as a guest, we would like to add our detailed account of the alleged event in a clearer perspective as hereunder:

Firstly we would like to mention from the outset that it is not our policy to responci publicly to any personal issues encountered by our guests. However due to the fact that the said guest decided to go public, we feel, though reluctantly, that we are duty bound to respond and put the record of the alleged event in its totality.

This is so, particularly since the said news was posted that our Warere Website was hacked and we were inundated by a massive release of negative messages. Within 3 hours we have received 4,000 negative reviews on Google from people who had never stayed at our Hotel but simply tended to believe a one sided story. It is true that we had Ms Zainab Oladehinde as our guest coming from Nigeria who arrived in APRIL, 2021. It is also true that she reported to our Management that a male security personnel (who is not our employee but was posted at our Hotel by the Security Company) went to her room and attempted to have sxxual intercourse with her.

Immediately we directed and assisted her to report the matter at the nearby Police Station as this is a criminal matter and falls under police jurisdiction to investigate and take appropriate legal measures.

The Police took her statement of complaint and accordingly the accused person (a staff member of the security company) was immediately arrested, detained and interrogated by the Police. However, to everybody’s surprise the Accused gave a different account of what happened.

He denied any wrong doing on his part and insisted that it was the Complainant who requested him to go to her room for a love affair. He said he got into the room with her permission and he did not break the door nor enter the room through other techniques.

When he got into the room she asked him to go and fetch a condom so that they will both be safe. He went out of the room to look for a condom and when he came back he was shocked to find out that the same woman was complaining that there was an attempted sexual assault.

All the same the Police decided that this was a Court Case and they were willing to pursue the matter in accordance with the existing laws. However it seemed, to our bewilderment, that Ms Zainab was not interested in pursuing the matter criminally with the Police.

We insisted that this was basically a criminal issue and we failed to understand her hesitation to pursue it as such, despite our readiness for any assistance. On payment of the amount she demanded we explain that such payment could be justified if at face value the alleged event was not controverteci by the Accused.

Under the circumstances where the Accused is denying any wrong doing then the proper cause was to pursue it as a Civil Case where she can sue the Accused, his Employer a. can even join the Warere.

She was adamant on this and was insisting on payment of USD Ten Thousand or she would tarnish our good image through social media, something she is doing after a lapse of a one year period.

As a woman-owned and operated business, the Warere takes guest safety and the safety of single women travelers extremely seriously, as evidenced by 6 years of verified positive reviews from women all over the world.

We tried our best to support Ms Zainab as soon as we learned of the accusations We immectiately brought her to the police and offered her support. The case was brought before Government authorities in April 2021 when it occurred. The police report indicated that this was a personal case, and not negligence on the part of the Warere.

Ms Zainab Oladehinde demanded a cash payment for damages from the Warere and was informed that the hotel would abide by damages rewarded by the court system of Zanzibar.

It is our assurance that we will continue to serve our guests from all corners of the world with the same level of hospitality and excellence that we have become known for throughout Zanzibar over the past six years.”