Home Music Davido opens up on his collaboration with Kanye West on his next... 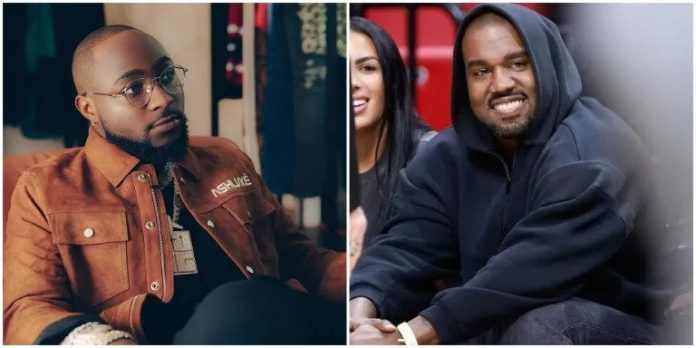 Davido, a multi-award-winning Nigerian musician and composer, has revealed that his next album will feature a collaboration with American singer Kanye West.

Davido’s creative touch was aided by the Sample’s vocal contribution, which raised the song and helped him attain the artistic touch he desired.

Davido revealed how he met and collaborated with Kanye West in an interview with The Dotty Show on Apple Music.

“You’re a lunatic.” We were in Atlanta for his release party, and then I met Jason, who works with Kanye, and we just went into the studio and gave them a couple of recordings, with ‘Stand Strong’ being the one that fit them best.

We then flew to Los Angeles to shoot the video. And maybe, we’ll be able to perform with them on a couple more occasions.” Davido tells the story of how the collaboration came to be.

Kanye West will not be working with a Nigerian for the first time; the billionaire rapper and fashion entrepreneur previously collaborated with Dbanj, whom he signed to G.O.O.D Music in 2011.

‘Stand Strong’ has been well appreciated, as it demonstrates Davido’s ability to experiment with new sounds and take a unique approach to his music.

“It was just a new mood, a different kind of record,” he says of working with The Samples. I wouldn’t say I’ve never made a record like that, but I’m not sure I’ve ever released one. But, funnily enough, that’s the kind of music I was attracted to before Afro beats and whatnot, like R&B, slow, soulful kind stuff.” Davido confesses his identity.
Working with Kanye West, a genius and 24-time Grammy winner, provides fans a signal as to the route Davido intends to take with his upcoming album.

Fans will undoubtedly be interested to learn what part Kanye West will play in Davido’s album, and whether it will be akin to Sean Puff Diddy Combs’ role in Burna Boy’s Grammy-winning album ‘Twice As Tall.’