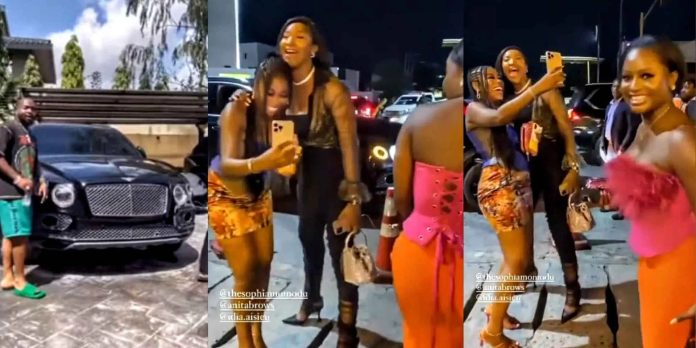 On social media, tongues were wagging over a video showing Davido‘s first baby mama, Sophia Momodu, stepping out in his Bentley with the singer.

The mother of one, together with her friends, was photographed in public with the ace singer’s Bentley, which was parked close behind them, in what appears to be a grant of permission.

Idia Aisien, a media figure and actress, and Anita Brows, a businesswoman, were among those shown in the footage of their outing. The ladies, who were all gorgeously dressed, were seen snapping a picture while waiting outside an unnamed location, as indicated in the video.

Meanwhile, reactions have continued to trail the video, with fans of the singer heaping praises on him as they admire his selflessness. @Godwin Justic wrote: “I swear i like dis guy. dude might not have the nicest vocal but he’s sure is an angel with a heart of gold.”

@Vic Amy: “Na me go become Davido 4th baby mama, we all must benefit from all this baby mama’s making, Lobbish”

@Veneratta Des: “This is why I so much love Davido. He is one of a kind, carries everybody along.”