Home Entertainment “Did They Forced the Old Lady on Him” – Sympathizers storm Maureen... 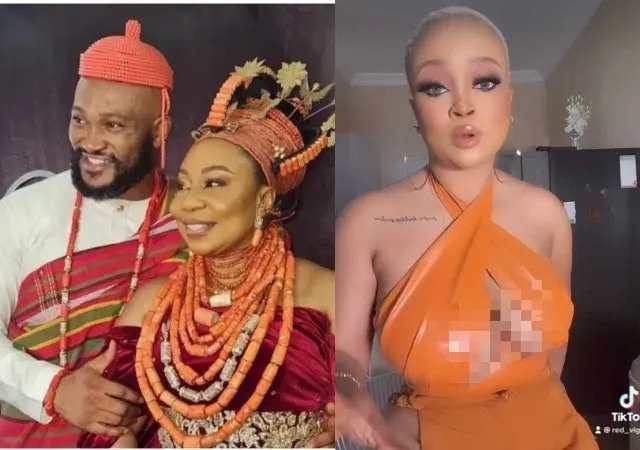 Reacting, sympathizers took to Maureen Esisi’s handle to console her, as they slam the new bride. Some described her as an ‘old aunty’ who was forced on Blossom. Another said she is ugly and not as beautiful as Maureen.

@wacos_5 I SWËAR… It is not my business but he could have done better at least… the Edo wife be lyk say na she be his AUNTY.

@redvigor I give it up to you👏👏👏. Damn beautiful. Blossom’s wife is. O way near your beauty 😂😂. Damn ugly

@stainless_lili kia una no dey mind una business sha !!! She doesn’t give 2 fuck about what is happening in Edo state!

While the traditional marriage was going on, Toke Makinwa, Kehinde Bankole, Kenneth Okolie, and other Nigerian celebrities stormed actor Blossom Chukwujekwu’s Instagram page to congratulate him on his ongoing wedding to Pastor Chris Oyakhilome’s niece, Winifred Akhuemokhan, two years after his marriage with Maureen Esisi crashed over infidelity.

Many of them including his fans jubilated over the move especially as he has been sober since the crash of his previous marriage, unlike his ex-wife, Maureen Esisi aka Red, who has been in the News for all the wrong reasons; from being sexually involved with actress Padita Agu to wearing sultry outfits to weddings, to her steamy videos with her brother and several other inappropriate behaviors that spark outrage on social media.

Asides from the undignifying behaviour of hers, she was always fond of heaping blame on him for their crashed marriage; which Blosson never responded to. Many of his colleagues, and fans appreciated and respected him for not always responding to her jabs.