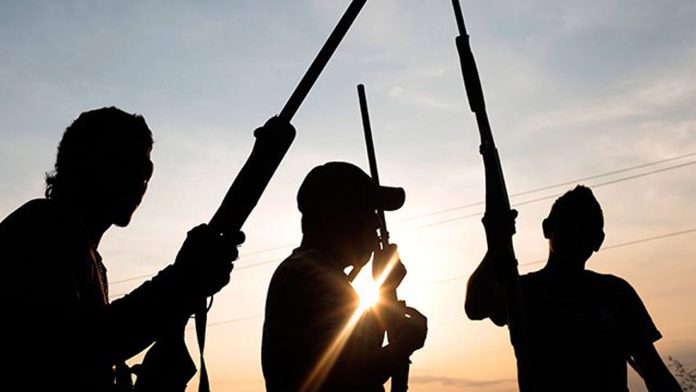 After beheading the couple, the gunmen were said to have called their family members to mock them.

Gunmen on Saturday shot dead and then beheaded a couple who were operatives of the Nigerian army.

Military sources said that A.M Linus, a sergeant first class in the army and his lance corporal wife were on their way to Imo State when the incident happened.

After beheading the couple, the gunmen were said to have called their family members to mock them.

A gory video of the incident seen showed the gunmen putting the heads on the victims’ chests after the incident.

“It’s so sad that we soldiers are no safer, the man was a member of the 19 regular intakes while the wife was of the 79RI.

“They were on their way to Imo state on Saturday when the incident happened. You won’t believe these gunmen as we speak still used their phones to make calls to their family members, making jest of them and threatening to kill them as well.

“This couple just married recently, even their photoshoot caused a lot of criticism and seems they were punished for it.

“Though the man is married to another woman with grown-up kids, he suddenly eloped with this young soldier, I was told the girl also had kids before joining the army as well.

“The man still has a father, his brother is also a soldier working at a battalion in Kaduna. The lady was also raped before they were beheaded,” a soldier said.

Attacks by armed men have increased in the South-East in recent times. The attacks often target security agencies and government facilities.

The latest development comes a few hours after gunmen invaded a military checkpoint in Agulu, Anaocha LGA of Anambra state on Saturday and opened fire on soldiers, killing one in the process.

The Indigenous People of Biafra (IPOB), an outlawed group, has been linked to the deadly attacks in the region. But the group has repeatedly denied its involvement in the attacks.

The leader of the group, Nnamdi Kanu, is currently detained in Abuja where he is facing trial for treason.