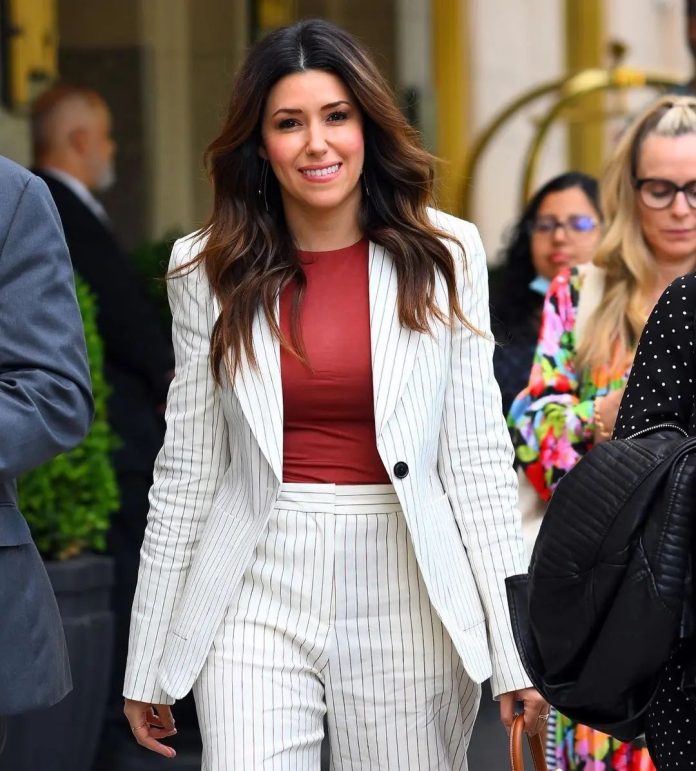 The court case between Johnny Depp and Amber Heard, a former Hollywood couple, has drawn millions of spectators from all around the world.

While the drama plays out in front of our eyes, Mr Depp’s brilliant attorney Camille Vasquez is also rising to fame online. Fans have taken notice of the 37-year-old Californian attorney for both her shrewd legal acumen and rumours that she is dating her client Johnny Depp.

Either way T-shirts with Camille’s name and hashtags are circling social media and Tik Tok videos of her in court even went viral, one of which gained 27 million views in a few short days. So who is this attorney that seemingly caught everyone’s eye? Let’s take a look at the total net worth of Camille Vasquez her salary, income sources, career, biography, luxurious lifestyle, and a lot more.

Camille Vasquez was (born July 24 1984) in San Francisco, California to father Leonel Vasquez and mother María Marilia Puentes. Her parents are of Columbian and Cuban descent. Camille also has one sister who is a doctor but not known publically.

Her father allegedly reportedly operated a UPS store in Anaheim, California, but a FedEx employee told Dailymail.com that the location has been a FedEx for the past ten years. Currently, her family resides in a luxury $1 million home in Buena Park, California.

Camille obtained a Bachelor of Arts in Political Science and Communications Magna Laude in 2006 after graduating from the University of Southern California. Following this and taking into account her personality, she made the decision to enrol in the private Los Angeles law school Southwestern Law School, from where she earned a Juris Doctor degree in 2010.

After seven years of practising law, Camille Vasquez got a position as an attorney at Manat, Phelps and Phelps LLP. She signed up to join the international law firm Brown Rudnick Feast at the orange county office where she currently works, however, she quit after a year to take a new job.

For the last 4 years, Vasquez has been an associate at the high-profile law firm and Johnny Depp had sought her out to represent him in his $50 million defamation case against ex-wife Amber Heard. One of nine attorneys from Brownrudnick that are involved in this trial.

Camille focuses on the plaintiff’s side defamation suits with additional experience litigating contract disputes, business-related torts, and employment-related claims according to her firm’s website.

Vasquez is also cited as having a wealth of experience with concomitant crisis communications and reputation management difficulties that result from these engagements. She was obviously a suitable fit for her client Mr Depp given her experience with plaintiff’s side defamation lawsuits.

In 2021 Camille was named as one to watch by the best lawyers in the United States for 2021 to s evidently living up to her billing. Not to mention Camille Vasquez is also bilingual and speaks Spanish. Camille rose to fame after being part of Johnny Depp’s 50 million dollars defamation case against Amber Heard. This case helped her to gain massive attention from social media and she amassed thousands of fans online.

Although she has never been married, Camille Vasquez presently resides in Orange County, California. When rumours that she is dating Johnny Depp surfaced, the celebrity attorney shrugged them off. Despite their closeness during the trial, the two maintain their professionalism, and it’s more than likely the case that they both have a strong desire to win the case.

Camille’s supporters have praised her for standing up for male victims of domestic violence on the other hand. It is yet to be seen whether Camille’s popularity and internet fame will translate into courtroom success in winning the case. Just because she is going viral on TikTok doesn’t mean the individual jurors are having the same reaction which will be more of defining moment in the end.

Camille Vasquez is an American attorney from San Francisco, California with an estimated net worth of $2 million US as of 2022. She is one of the most popular attorneys in the country and gained worldwide recognition after joining Johnny Depp‘s legal team in his defamation lawsuit against Amber.

Camille has already gathered a vast chunk of money from her successful career and it looks like in the upcoming year she will earn greater success as well as fortune.

She rose to fame as a result of her exceptional legal knowledge. The yearly salary of Camille Vasquez exceeds $250,000. The well-known lawyer Camille Vasquez has represented other high-profile celebrities in addition to Johnny Depp, including Leonardo DiCaprio, Ben Affleck, Jennifer Lopez, and others.

What is the net worth of Camille Vasquez?

Camille Vasquez is an American attorney from San Francisco, California with an estimated net worth of $2 million US as of 2022.

How much does Camille Vasquez makes?

What is the age of Camille Vasquez?

Camille Vasquez was born on the 24th of July 1984 in San Francisco, California, she is 38 years old.