Home News “No Difference Between You & Standing Fan”- Dino Melaye Comes Under Fire... 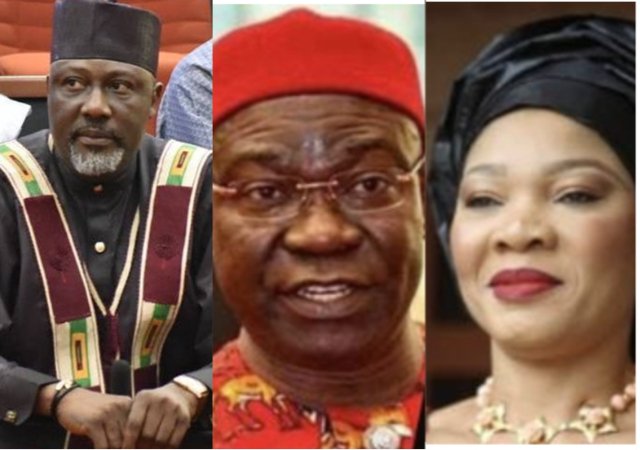 After publicly declaring his support for Ekweremadu in his ongoing Organ h@rveting case in the United Kingdom, Senator Dino Melaye received harsh criticism.

In response to accusations that they smuggled a 15-year-old boy from Lagos to the UK with the intention of harvesting his organs, the Uxbridge Magistrate Court in London yesterday refused Senator Ike Ekweremadu and his wife Beatrice bail.

It was alleged that the Ekweremadus’ was being accused of bringing the 15-year-old kid from Nigeria to the UK with the premise that he was to be given a better life in the UK but was actually to h@rvest his organ.

The former Senate President obtained the youngster’s passport under the pretence that he was 21 years old, but the prosecutors testified in court that they later learned the boy was only 15 years old.

Ekweremadu and his wife had separate legal representations and prayed the court to release them on bail but their prayer was however dismissed by the Magistrate. The couple has surrendered their passports to the UK government.

According to AriseTV, the red flag that stopped the organ from not being harvested came after the boy truthfully disclosed his age to the doctors at the Royal Free hospital in the UK. The doctor reportedly canceled the procedure.

The boy was taken from family who according to the prosecutors treated him like a slave, after he escaped and found his way to the police where an investigation started, leading to the arrest of the couple.

After much deliberation, the Magistrate ordered their remand in custody till July 7th. Hours later, a statement was released on social media showing a document which proves Ekweremadu had legal rights to conduct a kidney transplant and also travel with the boy.

Dino Melaye shared this document with a caption stating he stands with Ekweremadu, however, his followers refused to support him and instead criticized him. 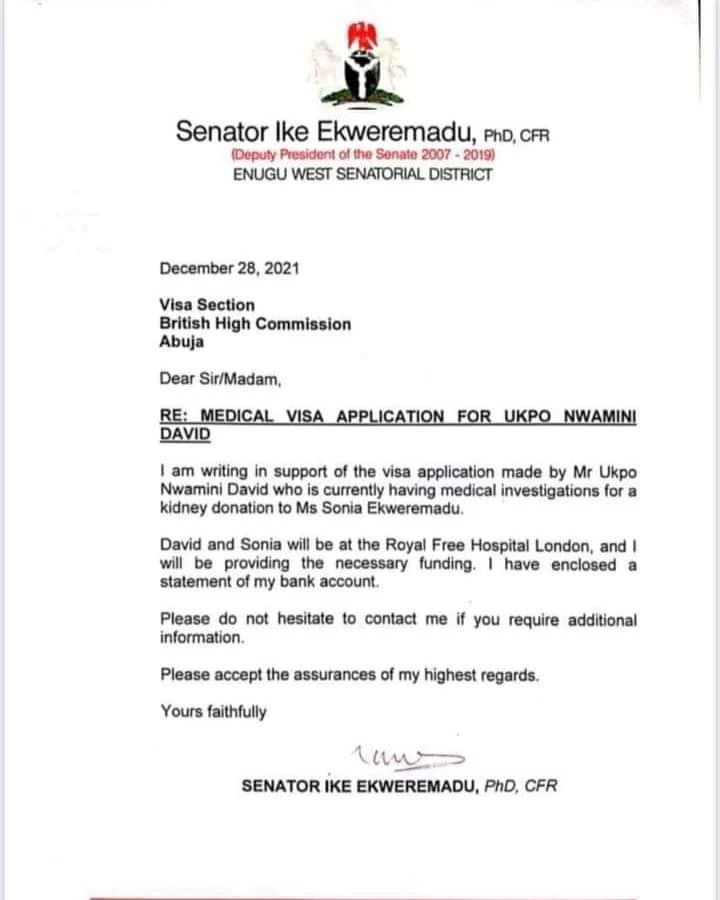 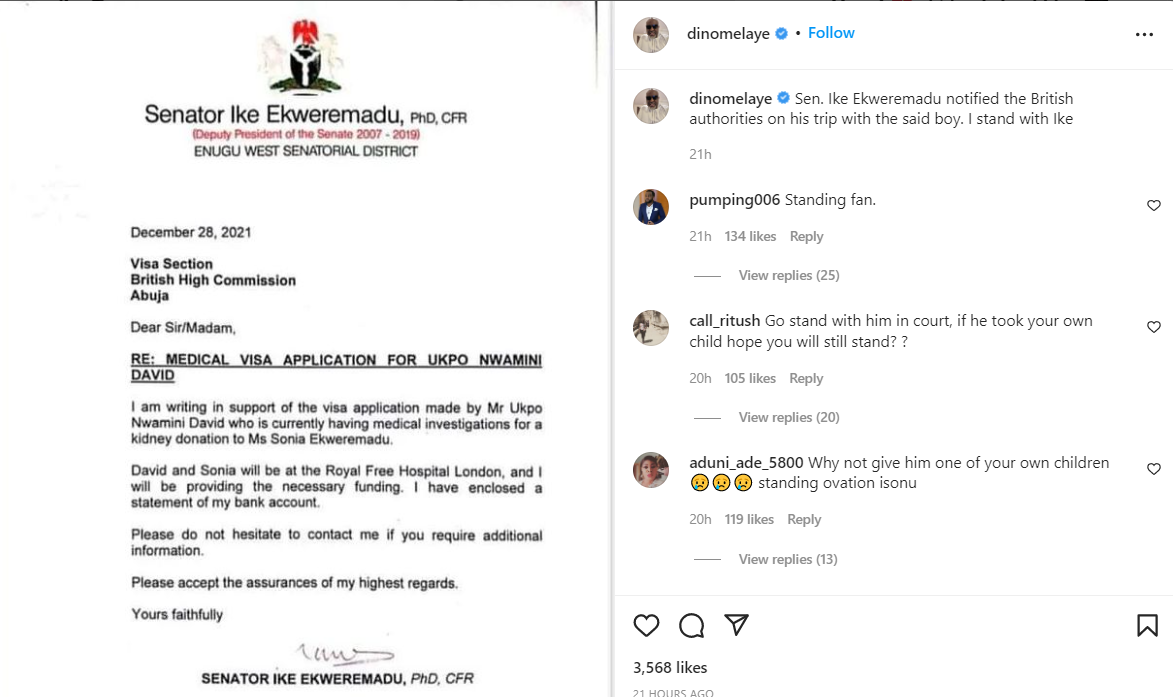 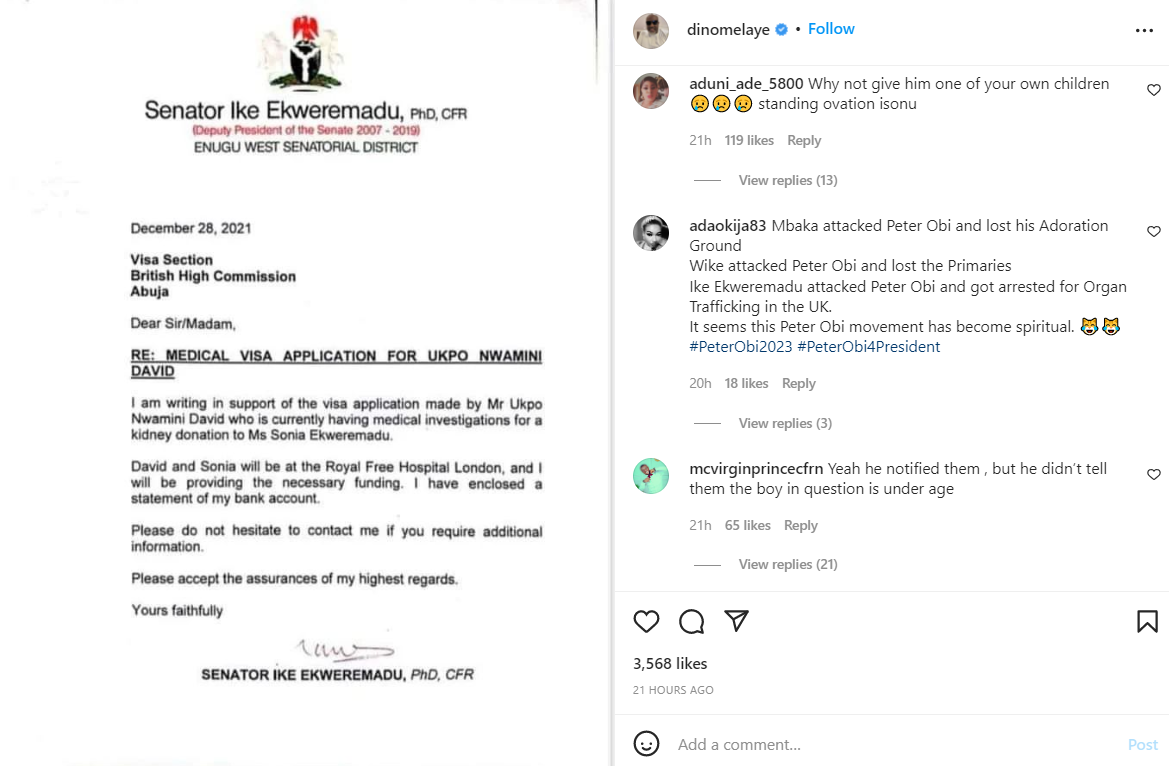