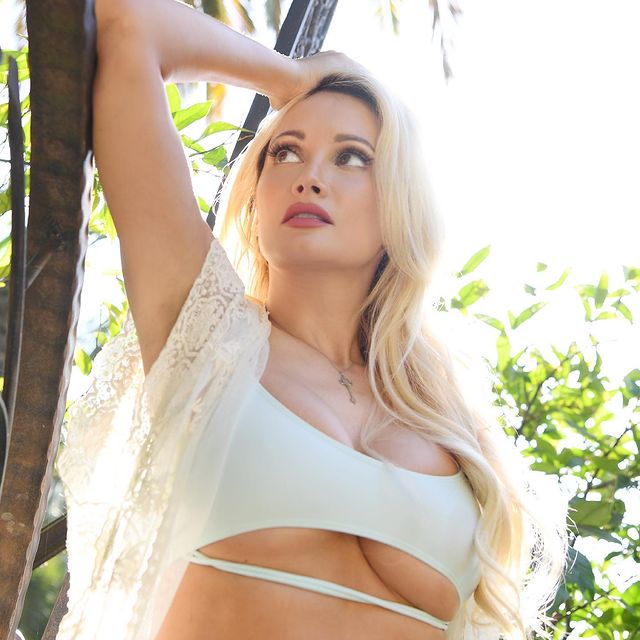 Holly Madison is a well-known American actress, model, television personality, showgirl, and television producer. She is regarded as one of the most talented and well-known actresses in the American television industry.

Holly is best known for appearing on the reality TV show titled The Girls Next Door as well as her own series Holly’s World. Apart from that, the actress is also well recognized as New York Times Best Selling author as she released several books such as Down the Rabbit Hole, The Vegas Diaries, and more.

She rose to prominence as a leading actress in the Hollywood film and drama industry, gaining worldwide recognition for her numerous popular performances. So now we’ll discuss Holly Madison’s overall net worth, her salary, income, assets, luxury lifestyle, acting career, biography, and more.

Holly Madison whose real name is Holly Cullen (born December 23, 1979), in Astoria, Oregon, in the United States. Her entire family moved to Craig, Alaska, on Prince of Wales Island, when she was two years old.

She moved back to Oregon with her family when in middle school and attended high school in the town of St. Helens. Holly attended Portland State University for two years after graduating from high school, where she studied psychology and theatre.

After that in 1999, the actress moved to Lose Angeles and completed her studies at Loyola Marymount University. Due to some financial problems, Madison was not able to pay her tuition fees, so she worked as a waitress in Hooters after becoming a Hawaiian Tropic model.

Holly Madison started her career as a model and was soon welcomed to the Playboy Mansion, despite the fact that she was just 21 years old at the time. Madison was given the opportunity to live at the Playboy Mansion the next year, and she became Hugh Hefner’s girlfriend. After a number of girls left the mansion in 2002, Madison became Hefner’s new “number one girl.”

Apart from that, Holly Madison started her acting career in 2003, when she started appearing in the reality TV series The Girls Next Door, which offered viewers an inside look into the Playboy Mansion. The show was also about Holly Madison’s lifestyle, and it helped her to become more popular in the entertainment industry.

Madison also got the chance to work as a regular model for Playboy magazine, where she initially posed naked alongside her co-stars from The Girls Next Door in the November 2005 issue.

She was on the covers of the magazines in 2006, 2008, and February 2009. Madison worked as an intern and then a junior photo editor at the Playboy studios during seasons 3 and 4. She also worked in design and put together the calendars for The Girls Next Door. Actress Holly Madison broke the news to the public in 2008 that her romance with Hefner had terminated.

And after their breakup, Madison quit her job from season 6 of the show The Girls Next Door. In 2008, the actress came up along with professional dancer Dmitry Chaplin in the dance television series Dancing with the Stars replacing Jewel.

During the dance practice, she was injured, so she was voted off. In the very next year, Madison got offered to play the role in the burlesque show Peepshow. The show was extended due to its huge popularity. The actress performed for more than 4 years in Las Vegas.

Later, she had her own show, Holly’s World, which was about her life and experiences as a performer at Planet Hollywood. From 2009 through 2011, the show aired. Madison’s debut book, Down the Rabbit Hole: Curious Adventures and Cautionary Tales of a Former Playboy Bunny, was released in 2015.

She detailed her life while staying at the Playboy Mansion in this book, which appeared on the New York Times Best Seller list. The following year, she published another book, The Vegas Diaries: Romance, Rolling the Dice, and the Road to Reinvention, which was also a hit.

In 2001, The founder of Playboy magazine, Hugh Hefner began dating the actress Holly Madison. She was one of several girlfriends Hefner but in the following year, she became his number 1 Girl. In 2008, Madison ended up her relationship with Hugh Hefner.

Madison began dating American entrepreneur Pasquale Rotella later that year. Rainbow Aurora Rotella Rotella, the couple’s first child, was born in 2013. They announced their engagement in the same year and married in September.

Forest Leonardo Antonio, their second child, was born in August 2016 to the couple.

Holly Madison has done endorsement work for numerous brands such as AMI Clubwear, NV supplements, Movietickets.com, and many others. She also became the brand ambassador of VIP Fan Connect.

Madison and her husband paid a whopping $3.475 million for a beautiful property in Las Vegas in 2013. This home is spread out over 10,500 square feet, or 2.72 acres, and it includes several incredible features such as a large outdoor swimming pool, a lovely backyard, and more.

In 2015, the actress paid $7.1 million for an 8,500-square-foot luxury home. It also boasts several opulent features, such as a swimming pool, jacuzzi, modern kitchen, and built-in barbeque. She put this house on the market in 2017 and sold it for $8.225 million.

Holly Madison is a famous American actress, model, television personality, showgirl, and TV producer, with an estimated net worth of $20 million as of 2022. She is one of the highest-paid actresses in the Hollywood television industry. After being in the industry for many decades, the actress racked up millions of dollars all thanks to her appearance reality television series The Girls Next Door.

Her earnings come from a variety of places, including TV shows, movies, and series, as well as modelling events. The model has also been doing advertisements since she was a teenager, and she has amassed a sizable fortune from them.

Holly Madison’s annual salary exceeds $3 million, and her net worth continues to rise. She has made a lot of money as an actress, model, showgirl, reality TV star, and author, among other vocations.

How much is the worth of Holly Madison?

Holly Madison is a famous American actress, model, television personality, showgirl, and TV producer, with an estimated net worth of $20 million as of 2022.

How much does Holly Madison make?

How old is Holly Madison?

Holly Madison was born on the 23rd of December 1979, in Astoria, Oregon, United States, she is currently 42 years old.